Story featured on the front page of the local paper about Kim and her blog: 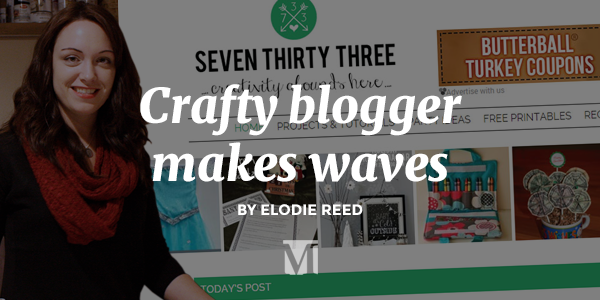 A little more than five years ago, Kim Conner was home on maternity leave. Just before her youngest child was born, Conner, who is 32 and has lived in St. Albans most of her life, gave birth to her now popular online blog: Seven Thirty Three. The blog about crafts, which can be found at 733blog.com, was Conner’s way to keep busy while stuck at home. “I had been online perusing and just happened to see a few creative blogs,” she said in an interview Wednesday. “Eventually I said, ‘Well I could do that.'”

Conner already made crafty things with her first two children. “It’s just kind of a hobby,” she said. She decided to start sharing her ideas online through her blog – a personal web site that is updated regularly with new content – and through social media outlets like Pinterest.com, Twitter and Facebook.Years later, she has a major following. “Right now I have 380,000 pave views per month,” Conner said. In addition to her thousands and thousands of online visitors, Conner has 8,000 Facebook followers, 13,000 Pinterest followers, and 1,800 Twitter followers. Conner said her “printables” are her most popular features – decorations, projects, games and valentines one can simply print off her blog for free. “That blew up, she said. “They’re (Pinterest) my number one traffic source.” Conner added that all of her items are budget-friendly. “I do things that people can afford to do,” she said. Kids crafts – often ideas her children helped think up – are also popular. “My son is very creative,” Conner said. “He’s always saying, ‘Hey, Mom, why don’t we try this.'” Conner now has a full crafting corner in her basement and projects in progress are visible around her home. Mushu the dog, who Conner called her “little helper,” gets involved, too. “When I’m on the floor, that’s his domain,” said Conner.

Finding success
Conner’s blogging success — she also works full time as a marketing director in Shelburne and is a parent to children aged five, seven and fourteen — is due, she said, to strategy, to trying new things, and to her passion for crafting. “You have to be dedicated,” she said. “Blogging – it’s been growing and changing.” Blogs, which started out as small, informal personal and creative sites, have grown into businesses. Networking through social media, advertising with networks, and collaborating with other bloggers is all part of it, said Conner. “It’s a totally different pace,” she said. At a blogging conference in Utah, she met women who were making six figures through their blogs, women who had their own retail lines or television shows. “There are all these new opportunities for bloggers now,” Conner said. She added, however, that blogs begin with passion for something and sharing ideas, and any that are made purely for income will probably fall flat. “It’s not an instant money maker,” Conner said. She added that she makes enough money to pay for holiday gifts and for her own crafting projects (some nice spending money). “I don’t recommend starting a blog to make money,” said Conner. “Readers get turned off by that. It’s something you have to have passion for.”

Conner also had another recommendation: think though a blog name carefully because once you have one, it sticks. “So 7/30 is my birthday, and I have three kids,” she said. Now, Conner added, she wished she’d put more thought into it. “If I realized it would turn into what it was, I would’ve spent more time on the name,” she said.

If you’re thinking of making this year’s Halloween costume yourself, you can stick with simple or go Hollywood pro. Neither has to take much time or money, and either can create a convincing costume, whether you’re looking to draw guffaws, shrieks or admiring nods.

Brenda K.B. Anderson, who builds creatures and costumes for the touring “Sesame Street Live” show at VEE Corp. in Minneapolis, says some of the same theories she uses there also apply to making Halloween costumes. A good costume blurs the line between reality and fantasy, she says; even simple subterfuge, such as donning a wig or wearing thick-rimmed glasses, can suffice.

“When people can’t see what you really look like beneath the makeup, hair and clothes, you are much more believable,” says Anderson, author of “Beastly Crochet” (Interweave, 2013).

For instance, she suggests padding a costume – such as around the middle for a clown or bear – to disguise your own shape and make it more authentic.

Start pulling your costume together by visiting a thrift shop, Anderson advises.

“Thrift stores are kind of a gold mine for the beginnings of Halloween costumes,” she says. “For very little money you can get a whole bridal gown – something that looks more authentic.”

Kim Conner, of Burlington, Vt., writes about thrifty craftiness at her “seven thirty three” blog. “I try to utilize things that I have, and what I have to buy is inexpensive,” says Conner.

For instance, her simple pig costume: Felt ears attached to a pink headband, a plastic bottle cap wrapped in felt and topped with a pink button to resemble a pig’s snout. Her mermaid costume, a little more complicated, involves sewing.

An added challenge is trying to keep her children warm on Halloween night without having to cover up with coats. Some tricks: Incorporate a hat, wig, hooded cloak or long gloves into the costume. On bare arms, wear nylons. Legs stay warm in thick-cotton stockings, leggings or tall boots.

The editors at Real Simple magazine also focus on scrounging around the house for supplies, such as brown paper bags and cereal boxes, or buying the bare minimum to fashion costumes for kids and adults. For a flapper, for instance, attach horizontal rows of fringed pink Post-it notes with red metallic tape to cover a simple dress; glue two mini cupcake liners, with gold-dot stickers in their centers, as flower decorations.

“It’s tailored toward having fun with the kids and getting them into it,” says Krissy Tiglias, deputy editor of Real Simple’s website, which offers more than 50 costume ideas. Many of the magazine’s adult costumes can be assembled moments before a Halloween party. The outfit often hinges on a pun. For example, wear a white chef’s hat and apron, and carry an iron (real or toy) to be an “iron chef.”

The creative types at Martha Stewart Living have turned out another Halloween Special Issue magazine full of costumes, some of which can be had in a flash: Glue blue and green craft-store feathers and a beak cut from yellow paper to green plastic glasses and wear a matching boa. Presto! You’re a parrot.

What’s really enchanting in the magazine this year? The plethora of faux lashes, contact lenses, lip appliques and gruesome tattoos – evidence Hollywood’s professional makeup secrets at long last can be ours.

“Special-effects makeup is really making its way into the marketplace. We wanted to show people what they could get themselves,” says Marcie McGoldrick, editorial director of holiday and crafts for Martha Stewart Living.

These items aren’t cheap – the featured snake-eye contact lenses cost $70 – and require planning ahead. But the effect can be haunting. For example, the “snake charmer”costume includes contact lenses, faux lashes, snakeskin-patterned lip tattoos, ample eyeliner and a rubber snake worn around the neck like a choker.

Other makeup effects include 3D scars and the latest in tattoos that mimic bruises, cuts and scars – all easy to apply, McGoldrick says.

She recommends buying one or two items, such as $10 Latex elf ears or a big wig, to add “that little extra bit” to a homemade costume.