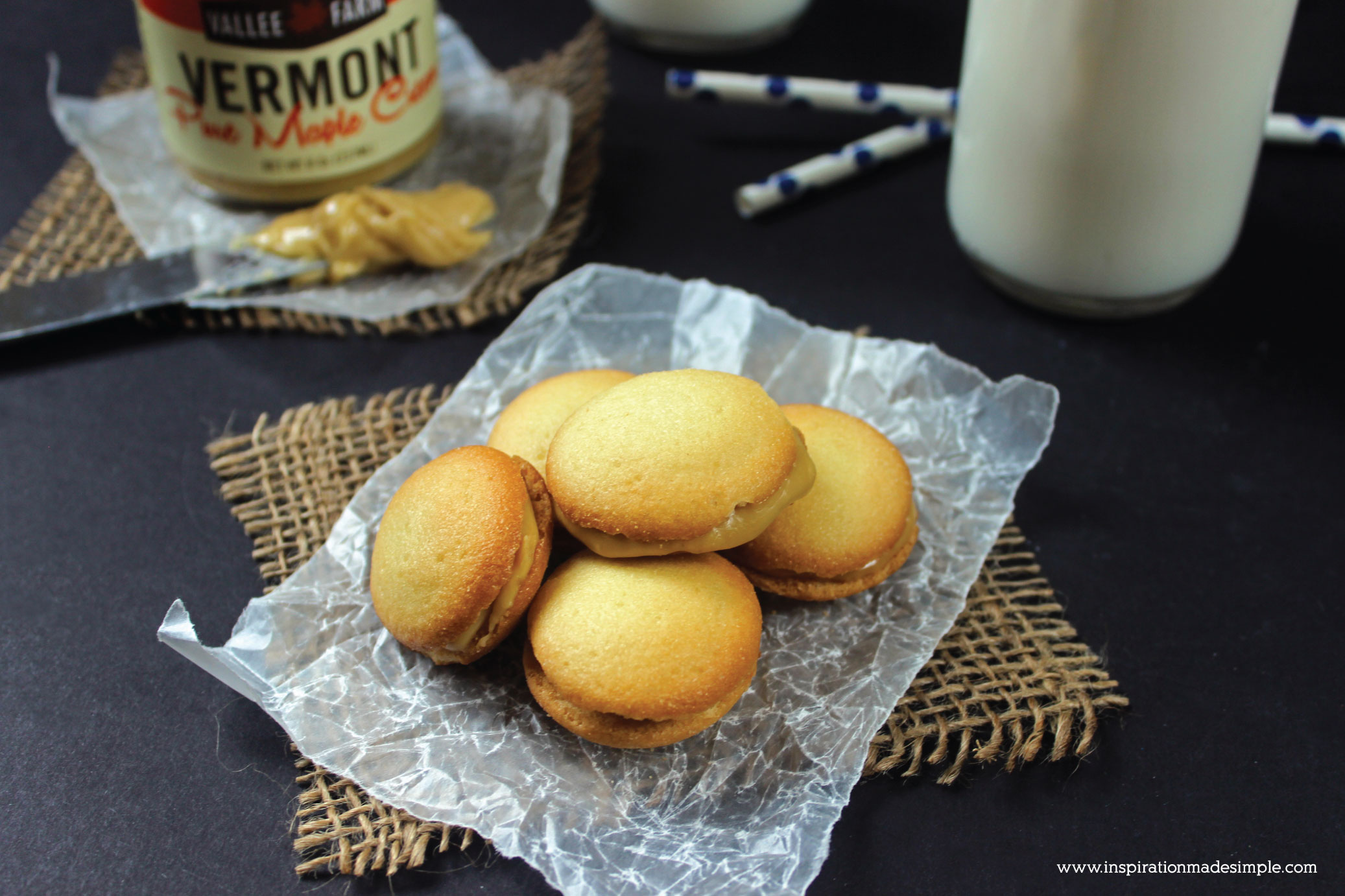 People always laugh at me when I travel because I bring along a small thing of Pure Vermont Maple Syrup so that I can enjoy a delicious breakfast. If I don’t have my Maple Syrup, then I won’t be eating waffles or pancakes while I am away from home. Hi, my name is Kim and I am a syrup snob. It happens to most Vermonters. We’re the #1 maple syrup producer in the United States. We take sugaring very seriously. I was raised on pure Vermont Maple Syrup and I can’t stand the fake stuff. And there is one product that I absolutely love, but most people have never heard of – even many Vermonters don’t know what it is. Maple Cream. Maple Spread. Whatever you want to call it, it is pure deliciousness. It is simply maple syrup that has been beaten into a crystallized form so that it can be spread – on toast, on crepes or pancakes, on biscuits. It is so good! And today I’m going to share with you a delicious dessert using maple cream – Maple Cream Vanilla Wafer Sandwich! 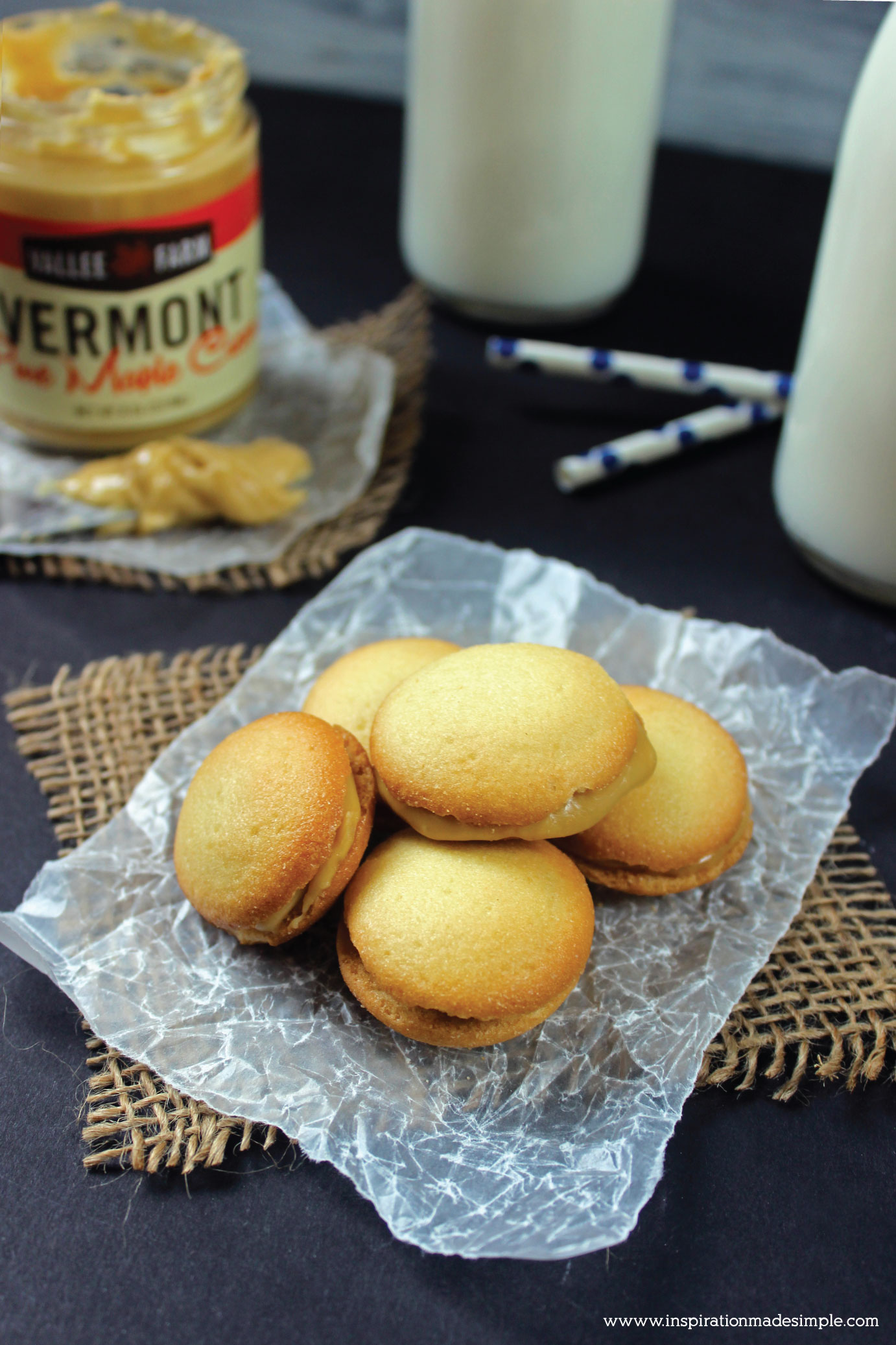 But wait, how will you make this if you’ve never heard of maple cream? Easy! Simply make your own maple cream (it is not for the faint of heart, but it is a fun process and you get the delicious maple gold at the end…) following the video below, or buy some! The Maple Cream I used in this recipe is from Vallee Farm, which is in my hometown.

Now that you have your maple cream, let’s get to the recipe!

Simply spread maple cream onto a vanilla wafer, stack another wafer on top and you’re done.

HA! Didn’t think it would be that simple, right? Trust me, these are addictive. But maybe you want to dress them up a bit more?

What pairs well with maple? Bacon! 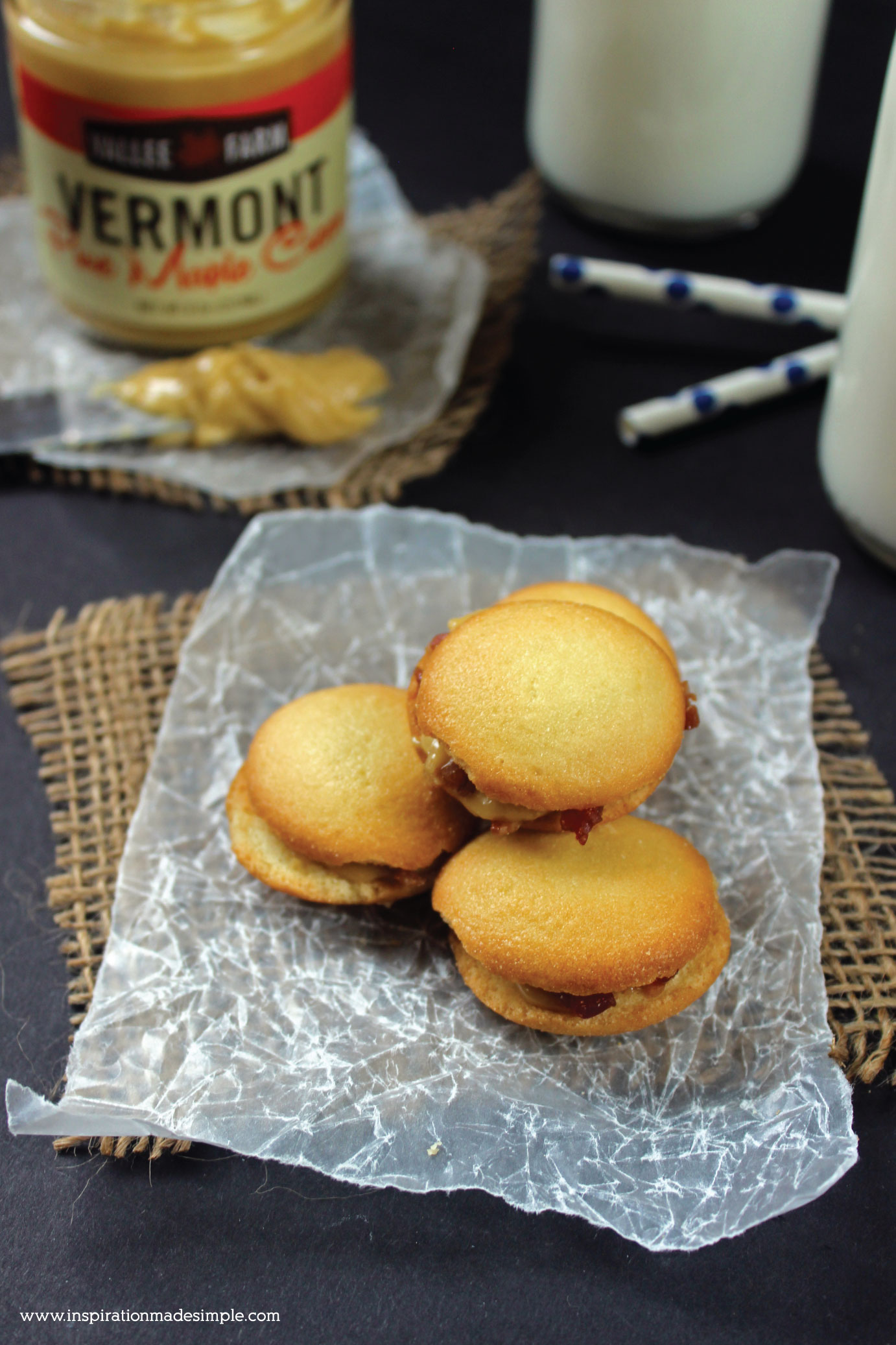 Cook up some bacon and break into small bits, or simply use store bought real bacon bits. Spread the maple cream on the wafer, sprinkle on some bacon bits and top with another wafer. This adds a bit of savory to all that sweet. 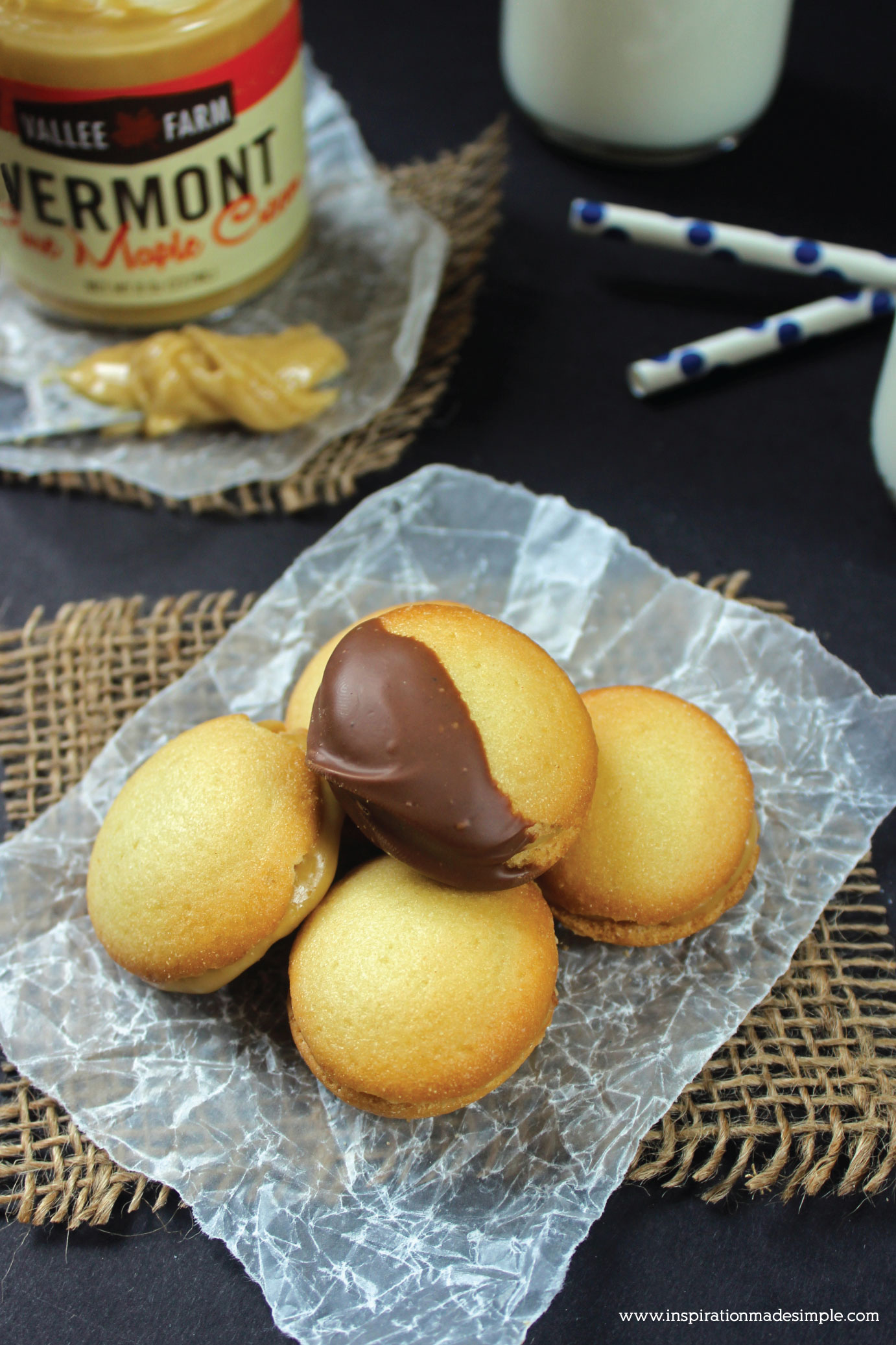 But wait! Maybe you don’t like bacon (gasp!)… so how about taking this cookie a bit further and dip the Maple Vanilla Wafer Sandwich into chocolate! Milk chocolate will add sweetness, dark chocolate the perfect amount of bitter.

Pour chocolate chips into a microwave-safe bowl. Place in the microwave for 60 seconds. Remove and stir. Continue with 30 second bursts until chocolate is completely melted. Either completely dip the cookie, or just dip half – whatever you prefer! Set on parchment paper and place in fridge to cool.

Want to add a little garnish to your Wafer Sandwiches?

Top the sandwich with a walnut! Just add a dab of maple cream to the top of the wafer and place the walnut on top.

Which version will you try?

Eat right away or keep cookies refrigerated until ready to serve. 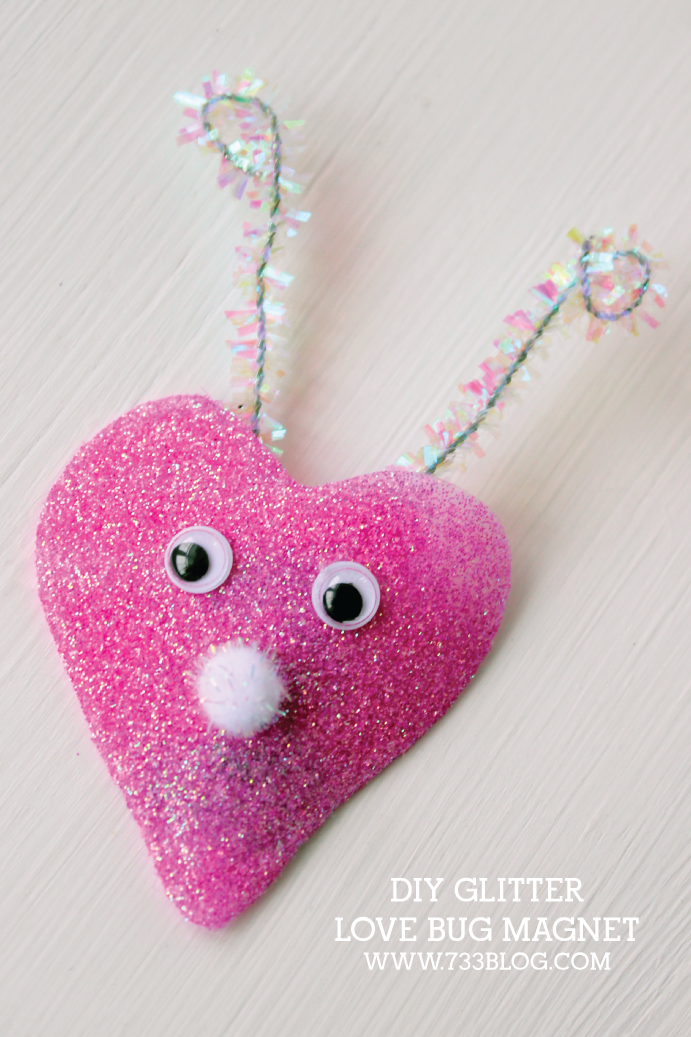 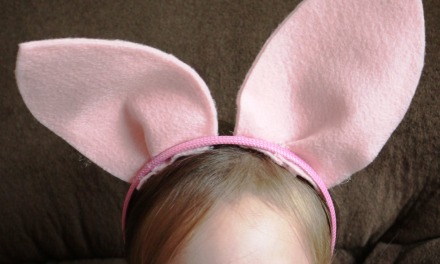 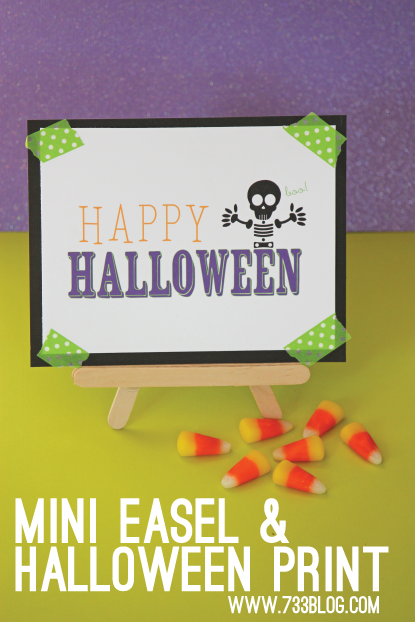