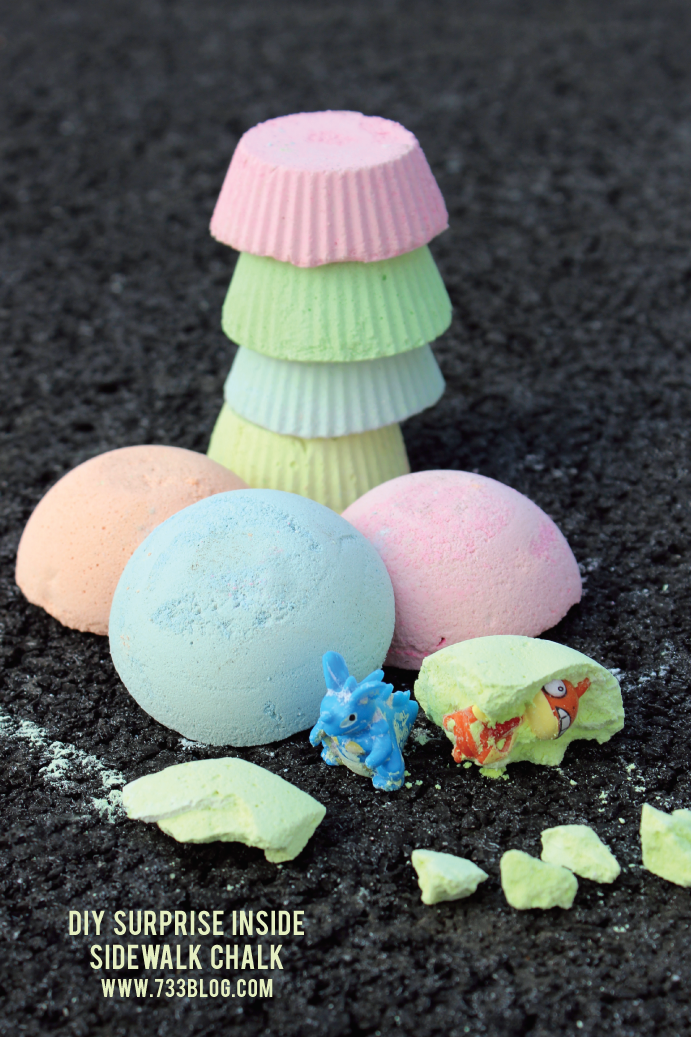 My kids love sidewalk chalk and we go through it like mad, so I decided it was time to make some DIY Sidewalk Chalk. It’s something I’ve been wanting to make with them so I finally ordered the materials to make it happen.

We all know that I can’t just do the same thing as everyone else though and a fun idea popped into my head while I was adding the supplies to my cart… You know those Treasure Soaps for kids where there are little figures or treasures inside the soap and it has to be used up before they can be pried out? Wouldn’t that be fun to do with DIY sidewalk chalk as well?

I thought it would be so I found some mini Pokemon characters and ordered them along with the rest of the supplies.

While we were making the DIY Sidewalk Chalk I pushed the figures into the mixture when the kids weren’t looking. Imagine their surprise when they were coloring away and came across a little pocket monster! 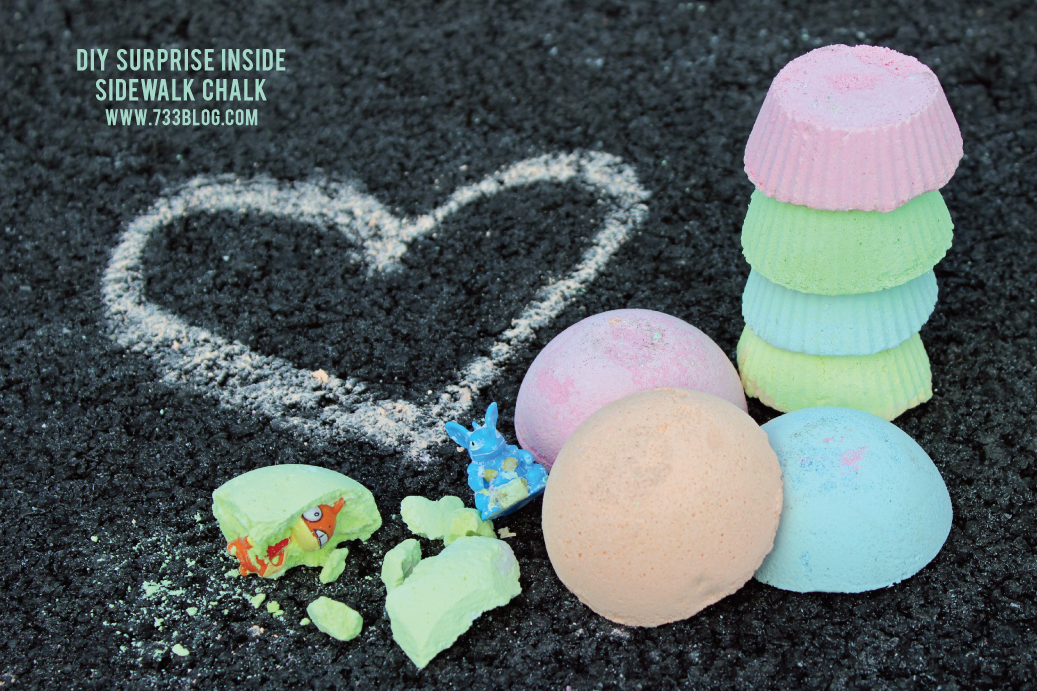 I made half of the DIY chalk with a surprise inside and half without. The first time my daughter came across one she was like, “what the?!” and after that, it was a free for all to see who could catch ’em all.

One hazard of adding a surprise inside is that the kids tend to go through the chalk faster because they want to find the little toys inside.

I bought an 8-pound pail of plaster of paris for $10, which should give me at least 100 pieces of chalk. And the kids had lots of playtime outside with the first batch, so definitely worth it in my eyes. I loved hearing their chatter later that night about the chalk. I mean, when do kids ever talk about their time outside playing with sidewalk chalk?!

This Surprise Inside DIY Sidewalk Chalk would make great party favors! Create a couple for each child and place a toy inside that matches the theme of the party. What a fun surprise the kids would have when they head outside to draw.

Surprise your kids with DIY Sidewalk Chalk with a little treasure inside by following along with the tutorial below. 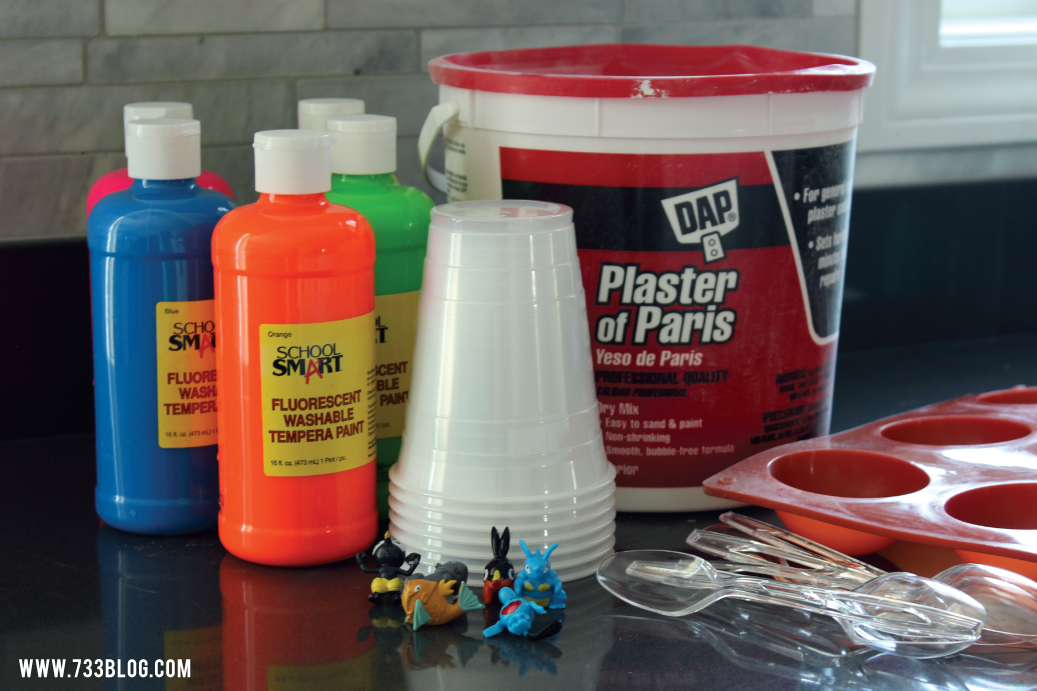 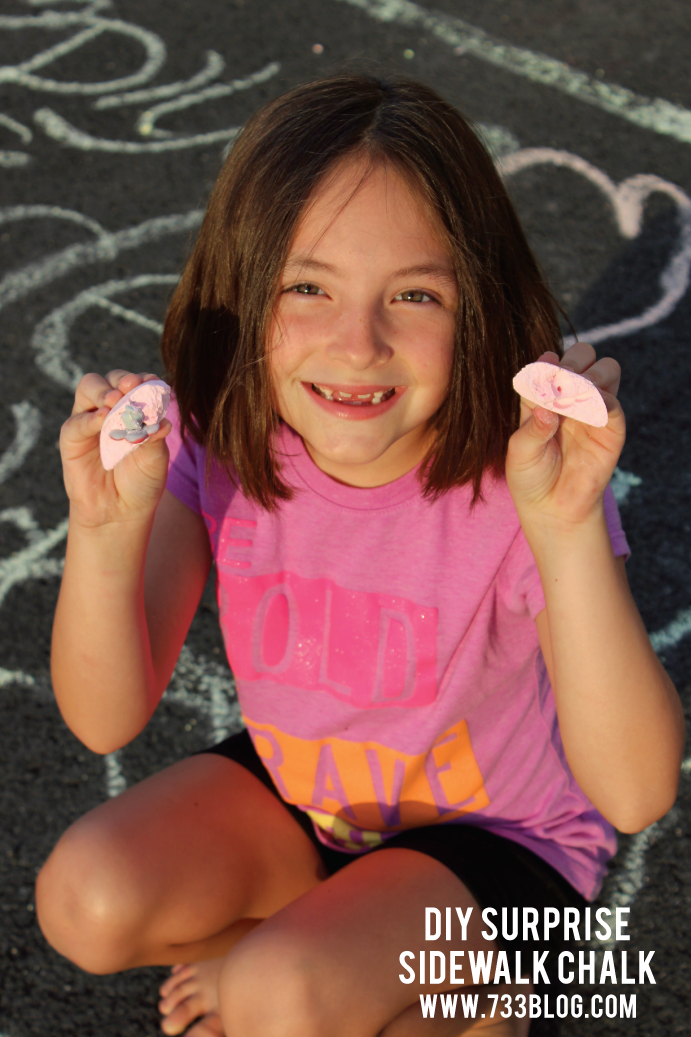 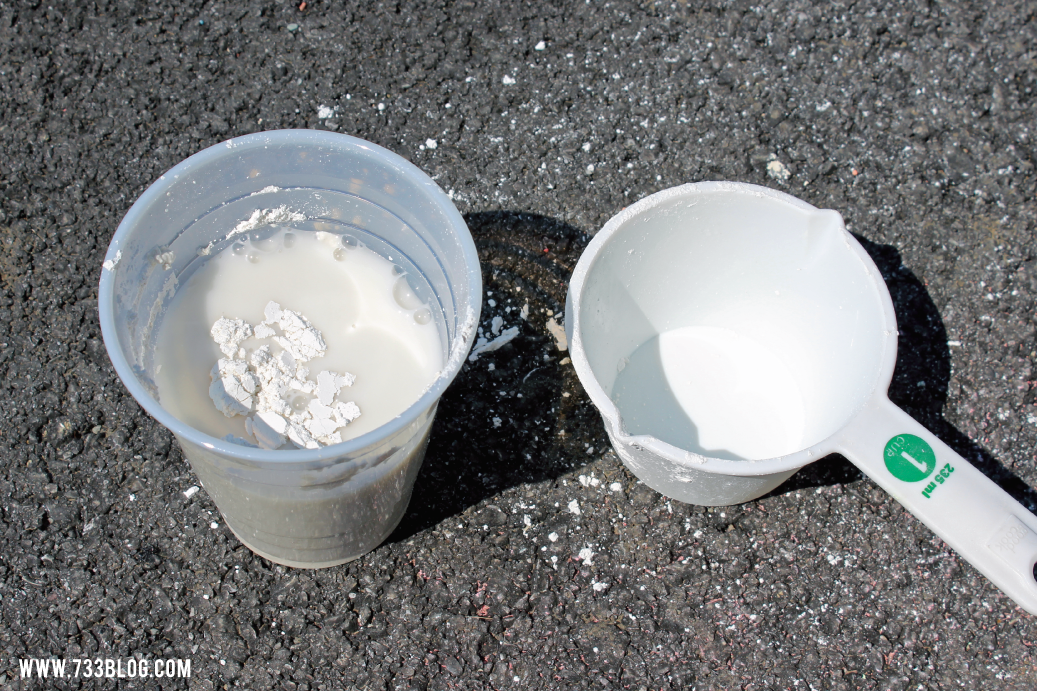 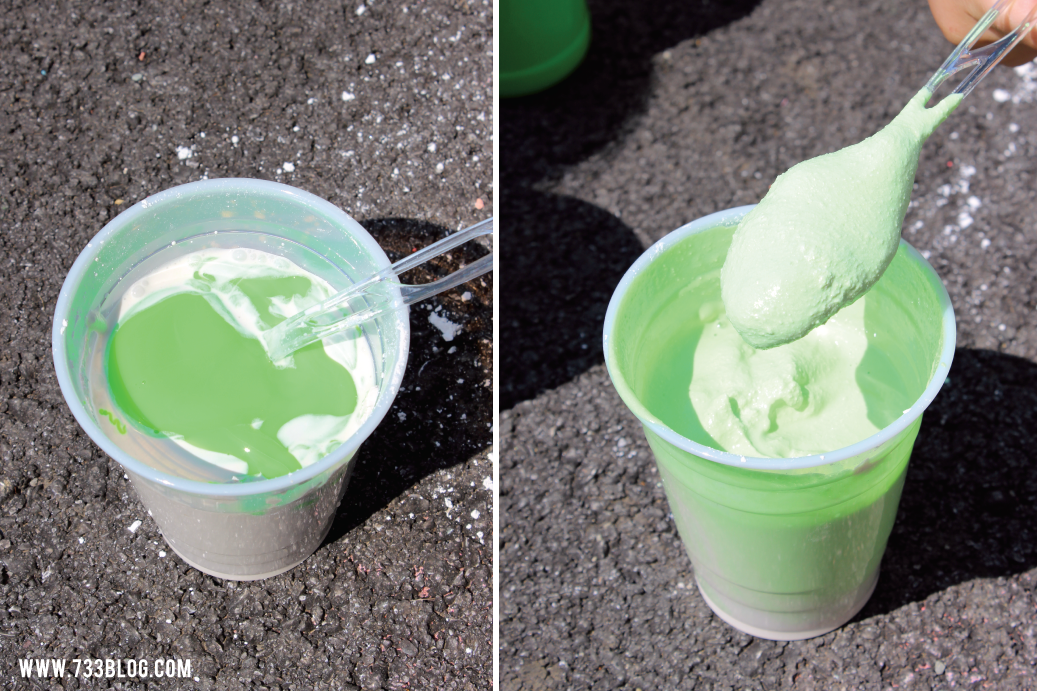 Add in 3 tablespoons of tempera paint, mix well. Once the paint is added the mixture should thicken up considerably.

(Recipe makes 4-6 pieces of chalk depending on the size of your mold. Repeat steps 1 – 3 for each color that you want to create.) 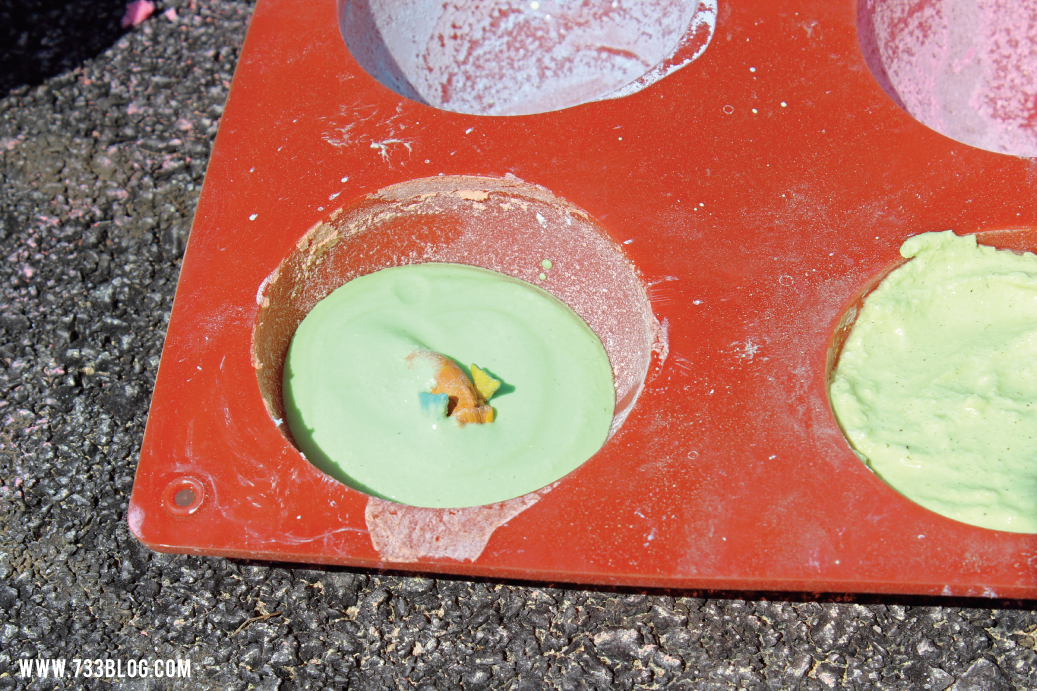 Pour into silicone molds. If adding a surprise toy inside, fill the mold half way, add in the toy and fill the rest of the way.

NOTE: I actually let mine dry for several hours until hard and then carefully wiggled the mold until they fell out when turned over. Feel free to test yours after several hours, as the drying process is quicker once the chalk is removed from the mold.

Carefully remove from the mold and let dry for another 24 hours.

Once the chalk is dry, head outside and get coloring! When the surprise is removed from the chalk simply wash it under warm water to clean off any residue.

The downside of having the kids help make the chalk is the fact that it takes so long to dry. For the 2 days of dry time I was asked multiple times if they could try it out yet. Because they were so excited to try their creation, I decided to whip up a batch of Sidewalk Chalk Paint since I had all the ingredients in house. This is always a hit with kids. I love how vibrant it is when it dries. My daughter got into this and we ended up making it two times in one weekend. 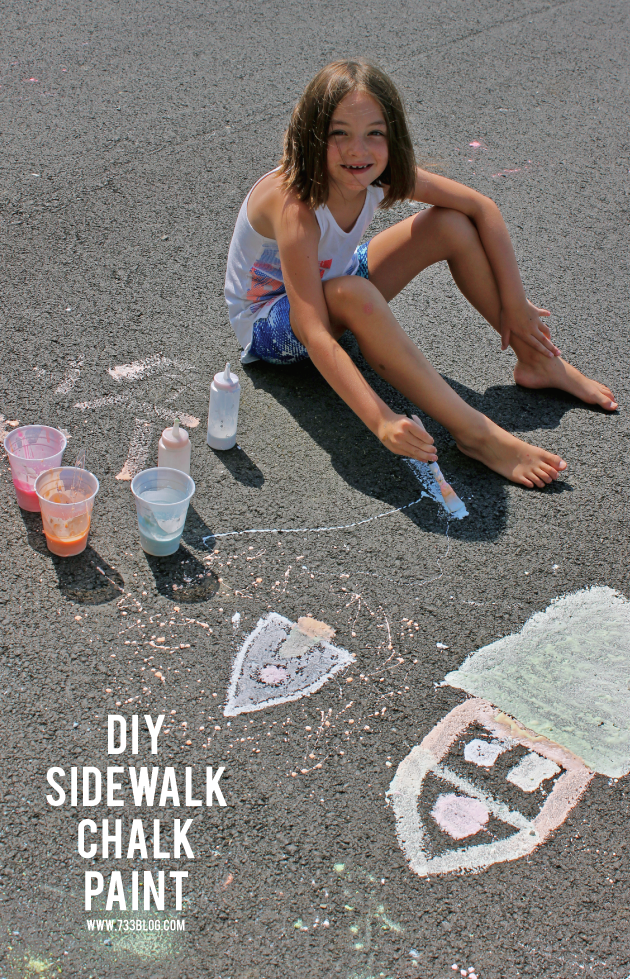 Add in 1-2 tablespoons of tempera paint.

Use a paintbrush or cookie decorating bottle to apply the paint. 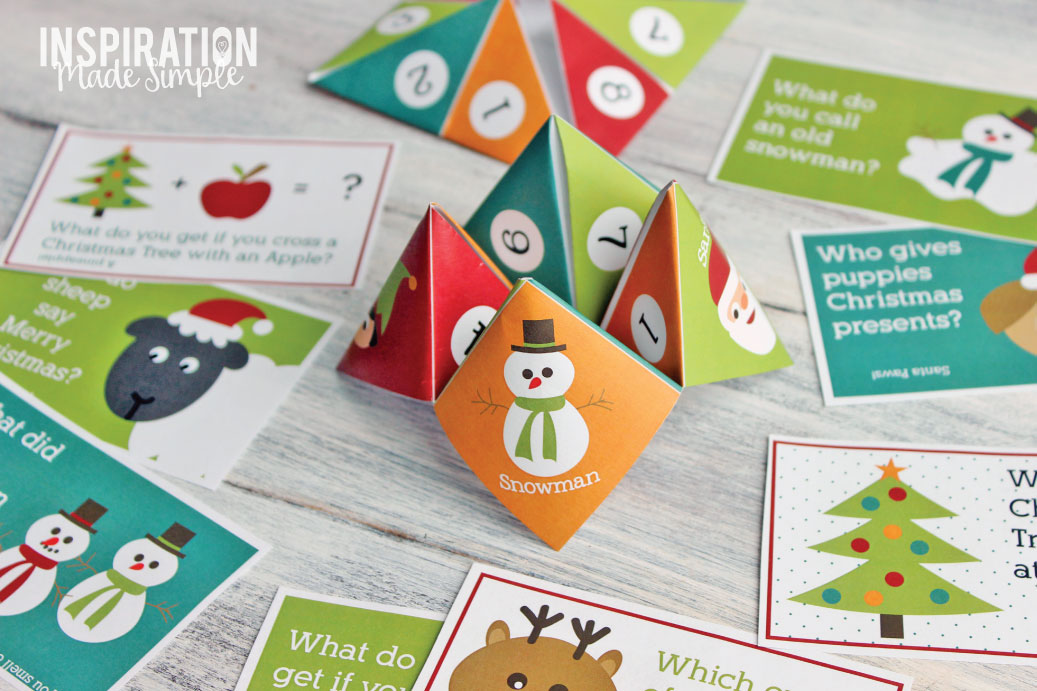 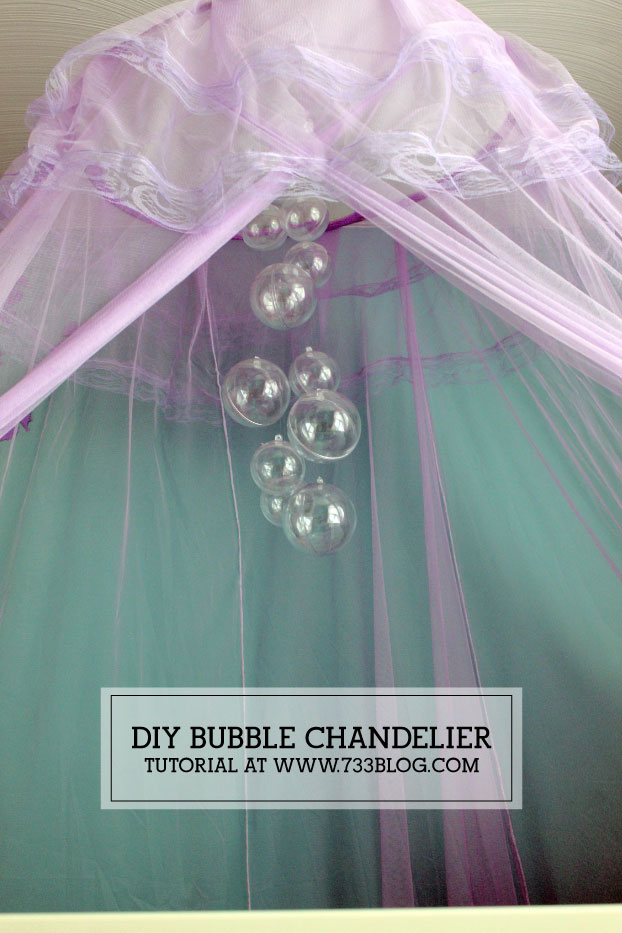 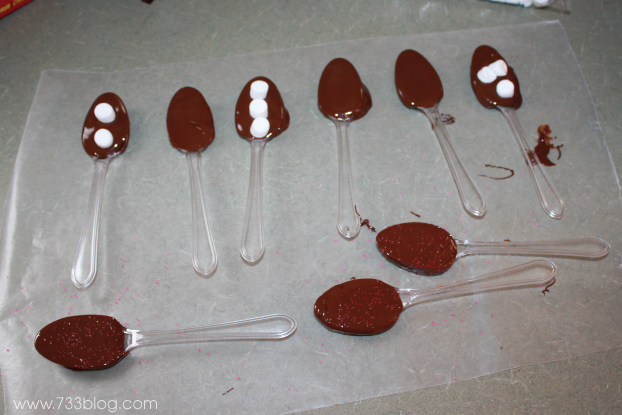