I am a member of the Collective Bias®  Social Fabric® Community.  This shop has been compensated as part of a social shopper insights study for Collective Bias and its client.
Last Tuesday, October 29, Monsters University hit store shelves. To say my kiddos were excited when I brought home the DVD/Blu-Ray with Infinity Figure was an understatement. They immediately asked to watch it, so I decided to whip up some Monster Crunch for them to enjoy while watching the movie. My two younger kids didn’t get to see Monsters University in theaters so were looking forward to getting the chance to check it out. 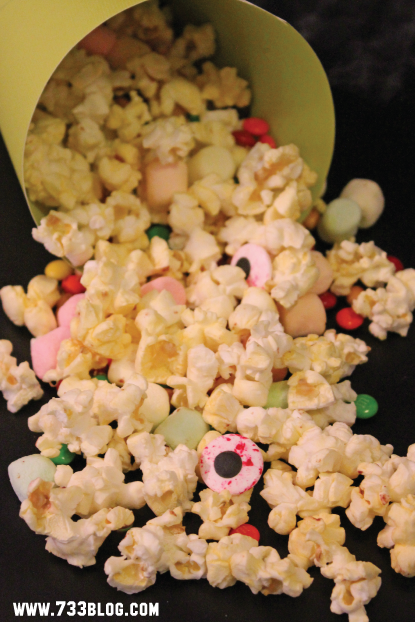 What is Monster Crunch you ask? Let me tell you! It is a delicious movie snack, PERFECT for watching Monsters University. It includes kid favorites of popcorn, mini m&m’s, and mini marshmallows. I also threw in some eyeballs to add the “monster” effect. I found the eyeballs in the Halloween section at Walmart, but I think you can find similar ones in the cake making aisle. 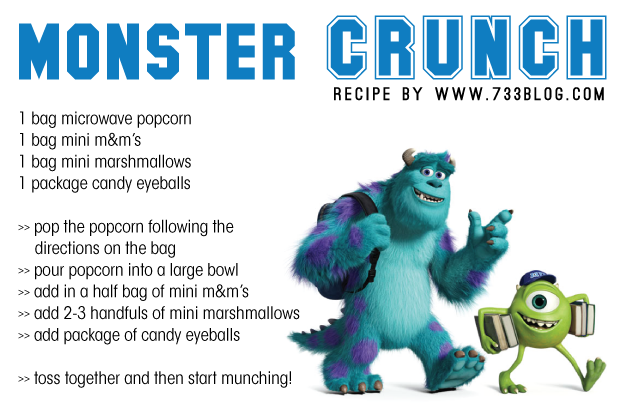 Pop a bag of popcorn, toss in half the bag of mini m&m’s, add two-three handfuls of mini marshmallows and then put in the full package of eyeballs. Toss together in a large bowl. The m&m’s tend to melt a bit and get soft, which gets chocolate on the other items, and the kids just love that! 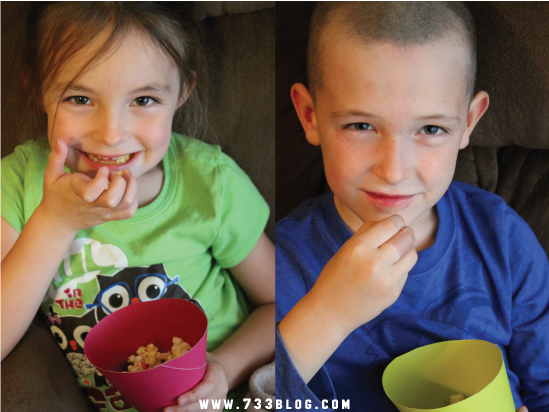 I decided to make cones out of scrapbook paper so each child would have their very own Monster Crunch. I think it would have been really fun to make up some Mike Juice boxes like A Pumpkin and a Princess has made! 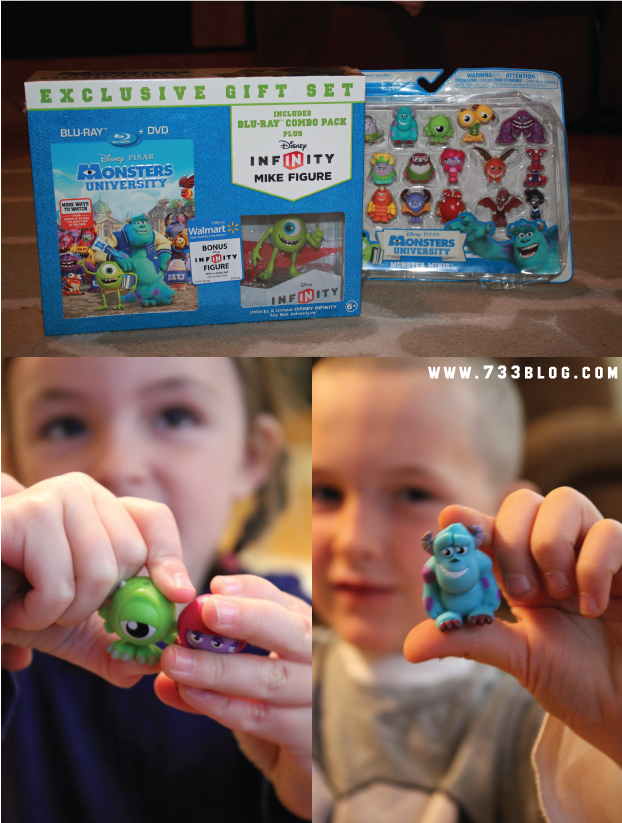 My son has been begging to get the Disney Infinity game so seeing the Mike Infinity character in the special edition pack made his eyes bulge! The first thing we had to do was open it up and take out the Mike figure. We hit the Disney Infinty website only to find out that the iPad/web version wasn’t available until November. Having to wait a few days until it was available was anguish for him! Having his Monster U character, yet not being to play. He also made sure to add the XBox game to his Christmas wishlist.
When I picked up the movie I also picked up a pack of 17 mini-monster university characters from the movie. My kids got all of their favorite characters from the movie and they absolutely love little toys like this.
The Monster Crunch takes about 4 minutes to make, and after I was done we sat down to watch the movie. Snuggled together munching on our Monster Crunch, the little characters all lined up watching with us. The perfect way to spend a Friday evening!
What did the kids think of the movie? Thumbs up all the way around. 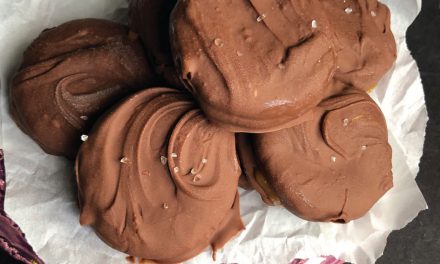 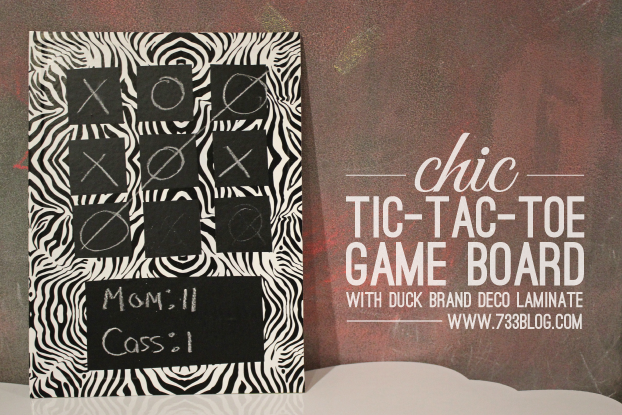 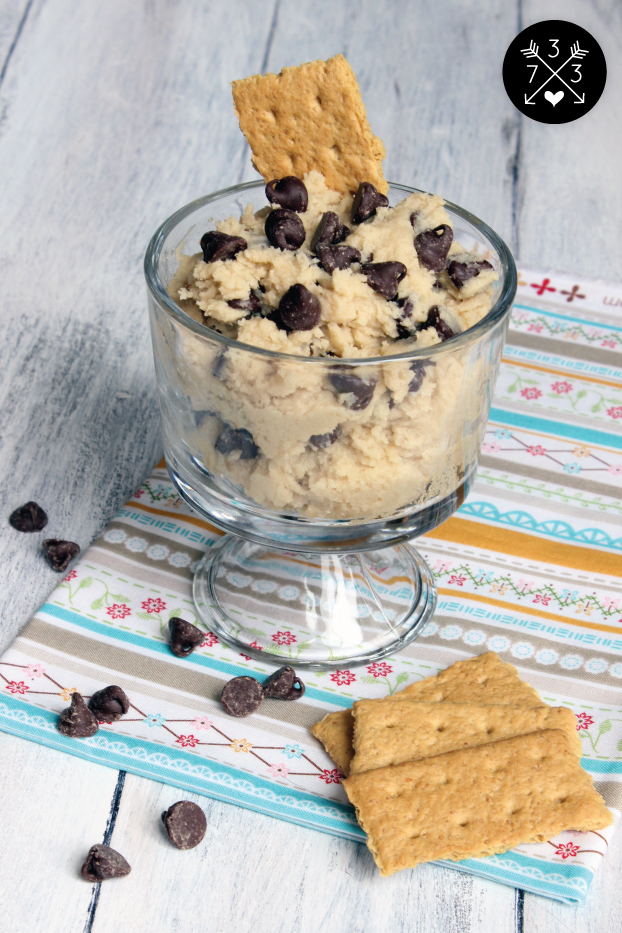 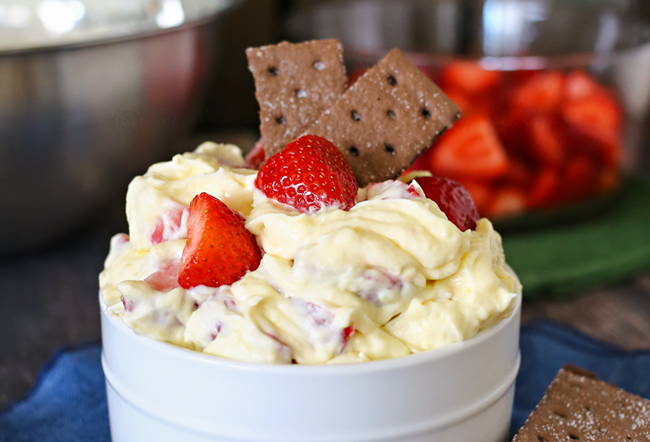