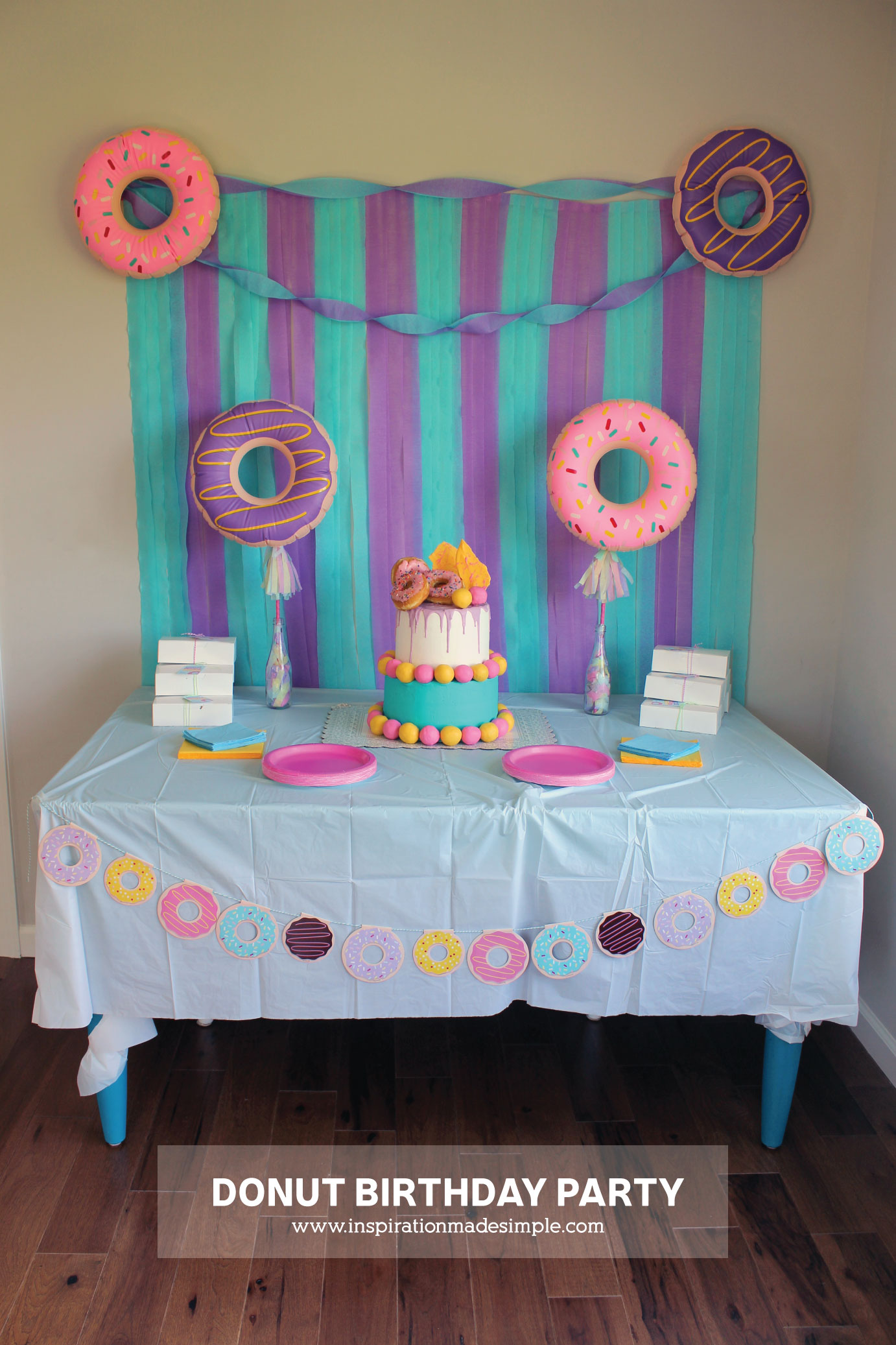 This post is brought to you by Oriental Trading. All opinions are 100% mine.

This past weekend we celebrated my daughters 8th birthday with a fun and delicious Donut Birthday Party. It was a simple affair for family and friends that we hosted in our home. As always I put together a colorful cake table and made some tasty snacks. And the star of the party, besides my daughter, of course, was the fabulous Donut Cake!

Want to create this look? It’s super simple. I used streamers as a backdrop and used the super smart tape method to hang them. Using masking tape, cut a length the size of your tape and tape it to the wall, sticky side out. Then cut strips of streamers and stick it to the masking tape. To hide the top line of streamers, I simply twisted two streamers along the top and did a second one as a swoop for added detail. I then added two inflated donuts that I received from Oriental Trading. They’re on of my favorite places to look for fun party supplies. 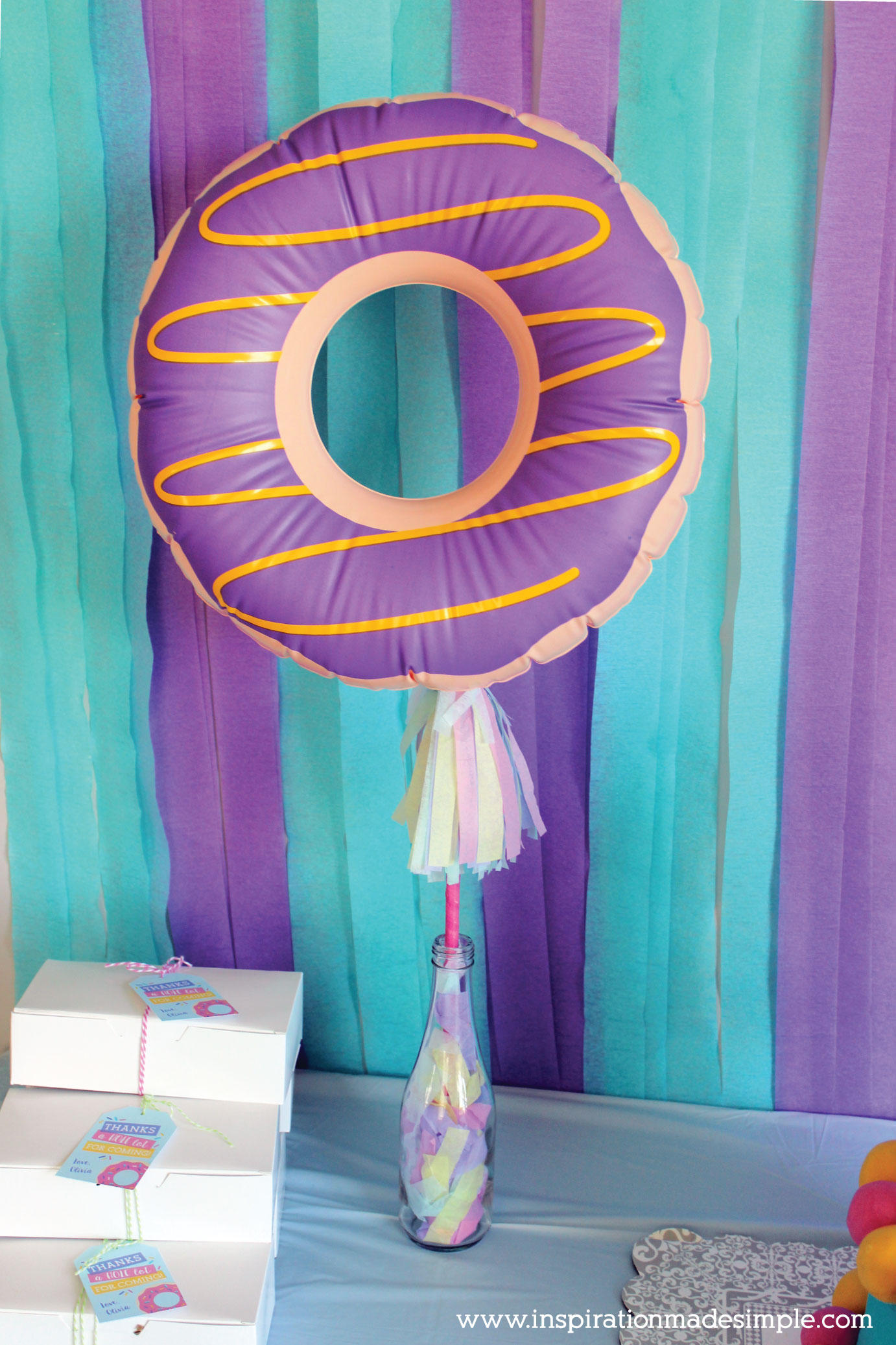 For table decor I used glass soda bottles, also from Oriental Trading, a dowel that I covered in washi tape and inflated balloons. I simply taped the balloon to the top of the dowel, added tissue paper fringe and stuck it in the bottle full of tissue paper strips. Simply and adorable. 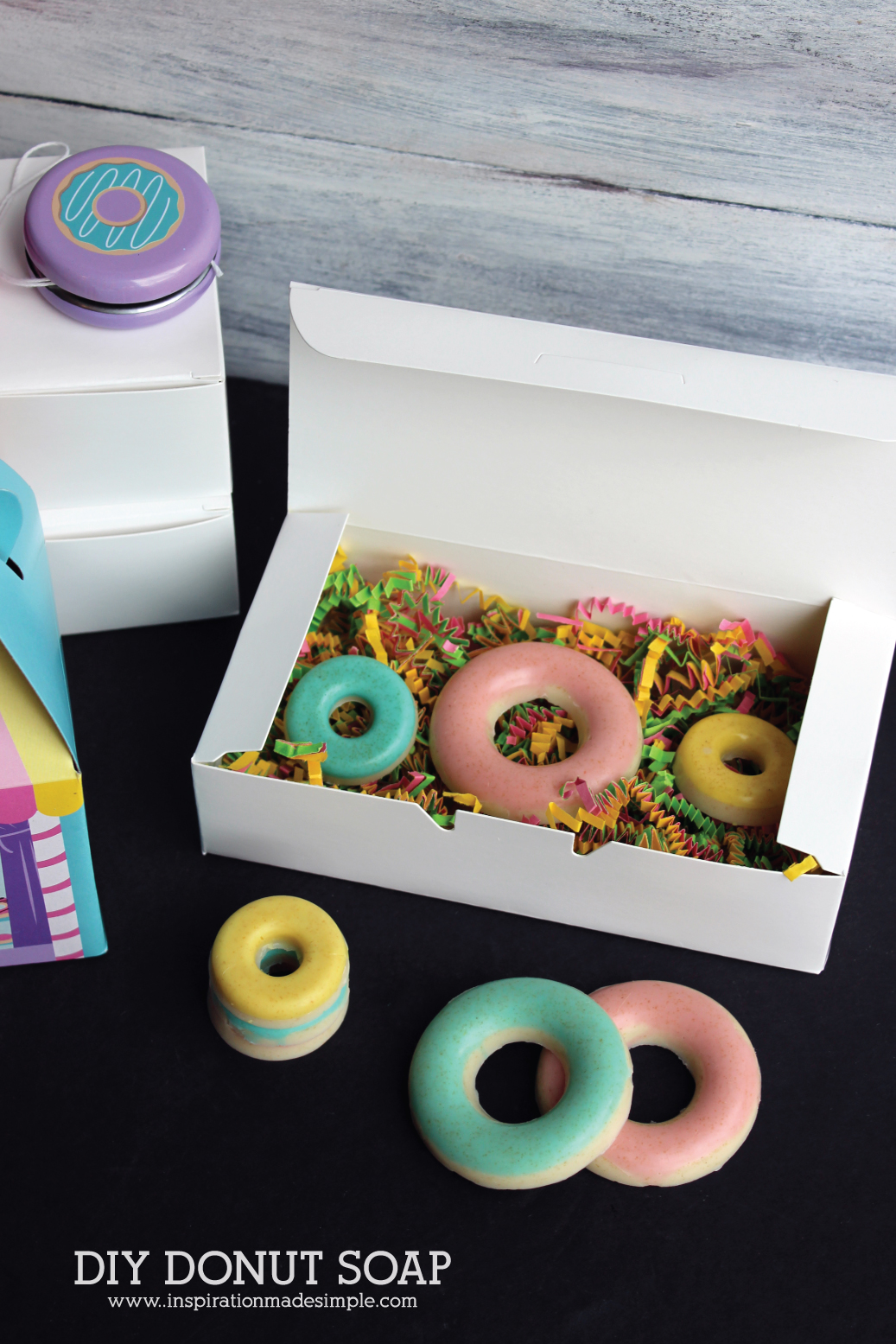 The boxes are full of DIY Donut Soaps that my daughter and I made. I added favor tags that I created and attached them with bakers twine. I’ve made the tags available as a download at the bottom of this post. 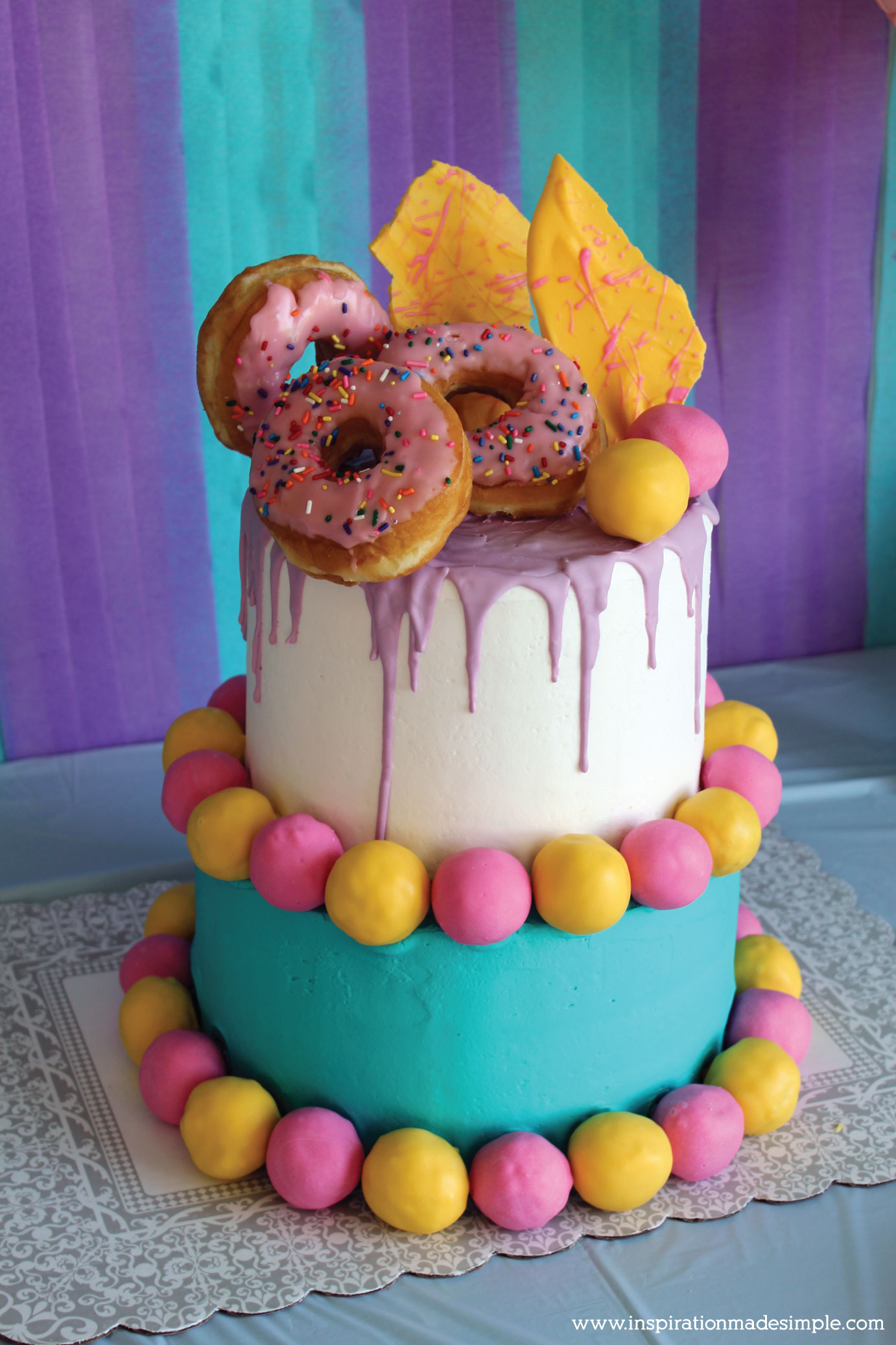 And that fabulous cake is from Miss Trendy Treats. If you are looking for cake inspiration, then she is the YouTuber to follow. You may remember the SpongeBob Cake that she made for my daughters 7th SpongeBob party. Not only are her cakes fabulous, but they taste amazing as well. This one was a vanilla cake covered with buttercream frosting. The donut holes were covered in candy melts. Isn’t it beautiful? Make sure to follow Miss Trendy Treats, as she will be sharing a tutorial for this Donut Cake in the next few weeks. You can also find her on Facebook and Instagram! 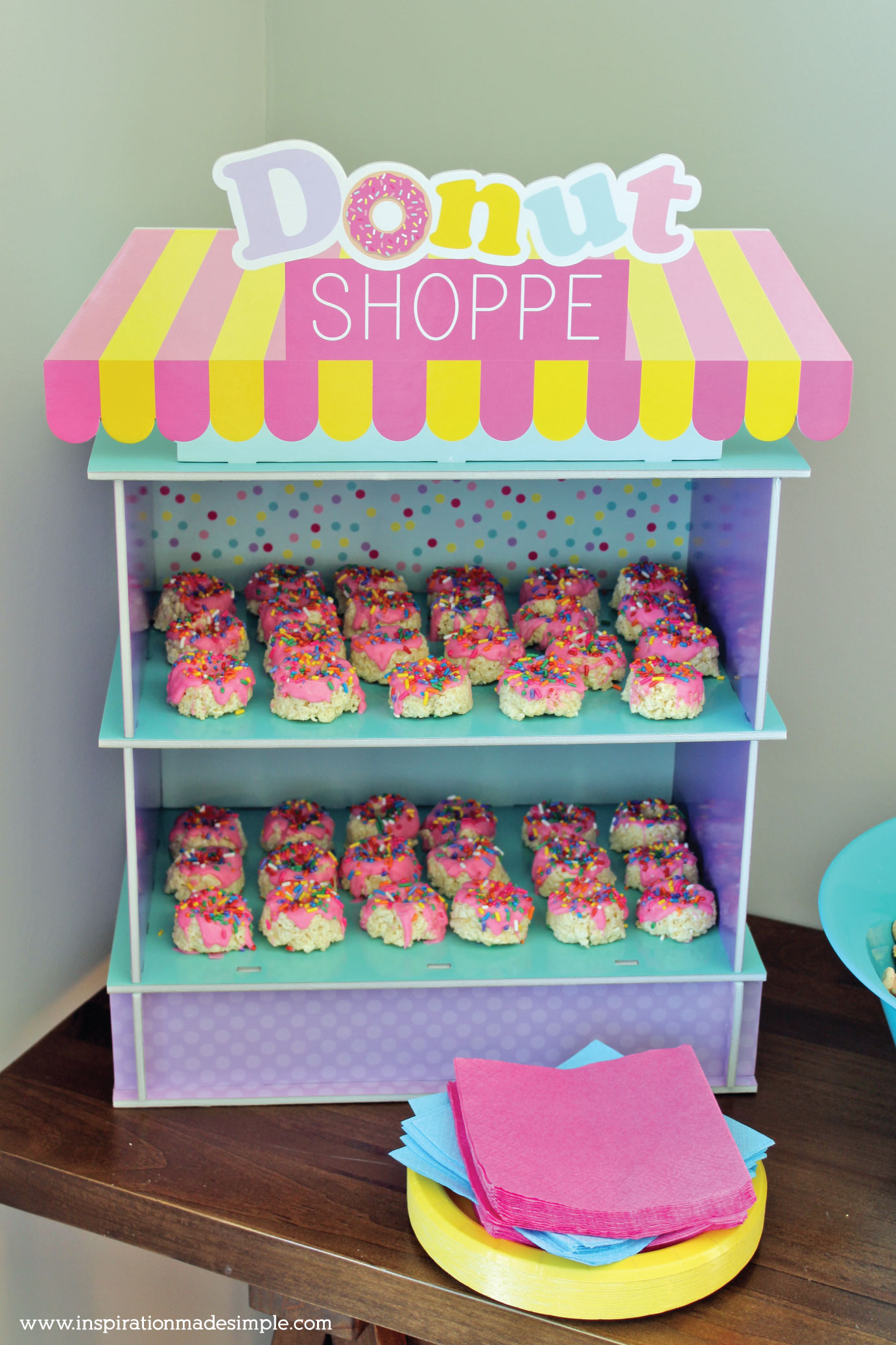 For snacks my fabulous friend Krista made Rice Krispie Treat Donuts! These mini morsels were also super delicious and there was none left after the party. Simply make Rice Krispie Treats and instead of putting in a rectangle pan, put them into donut pans! Once they are ready, cover them in melted candy melts in the color of your choice and add a few sprinkles. Super festive! That super cute Donut Shoppe Stand came from Oriental Trading. After the party we ended up turning it into a hotel for my daughters Gift ‘Ems! 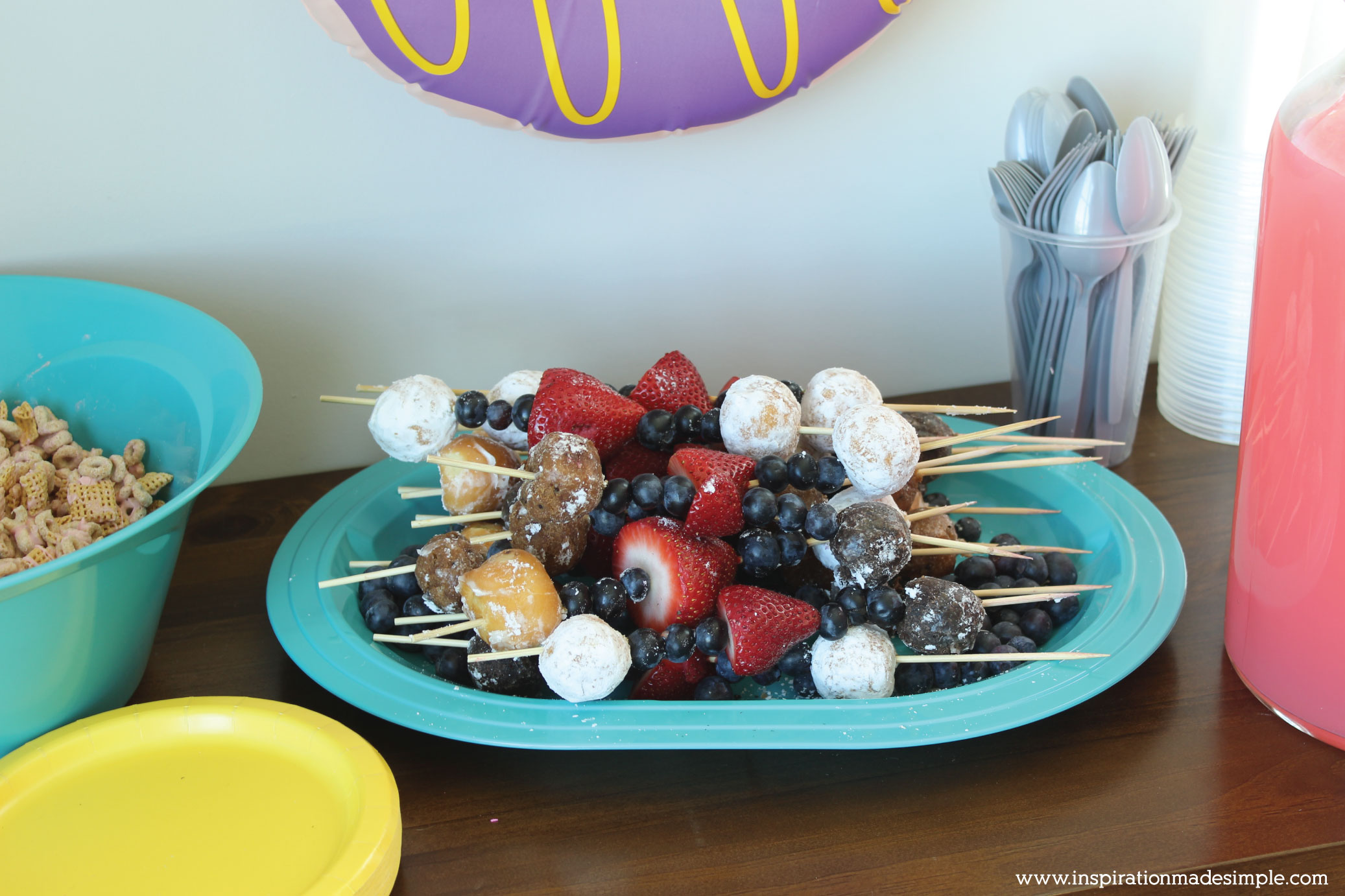 We also did Donut Kabobs. My daughter actually made these and was quite proud of herself! She added strawberries, blueberries and Donut Holes from Dunkin Donuts to bamboo skewers. Simple and tasty. Lastly I had a bowl full of Donut Party Mix, which is a crowd favorite. 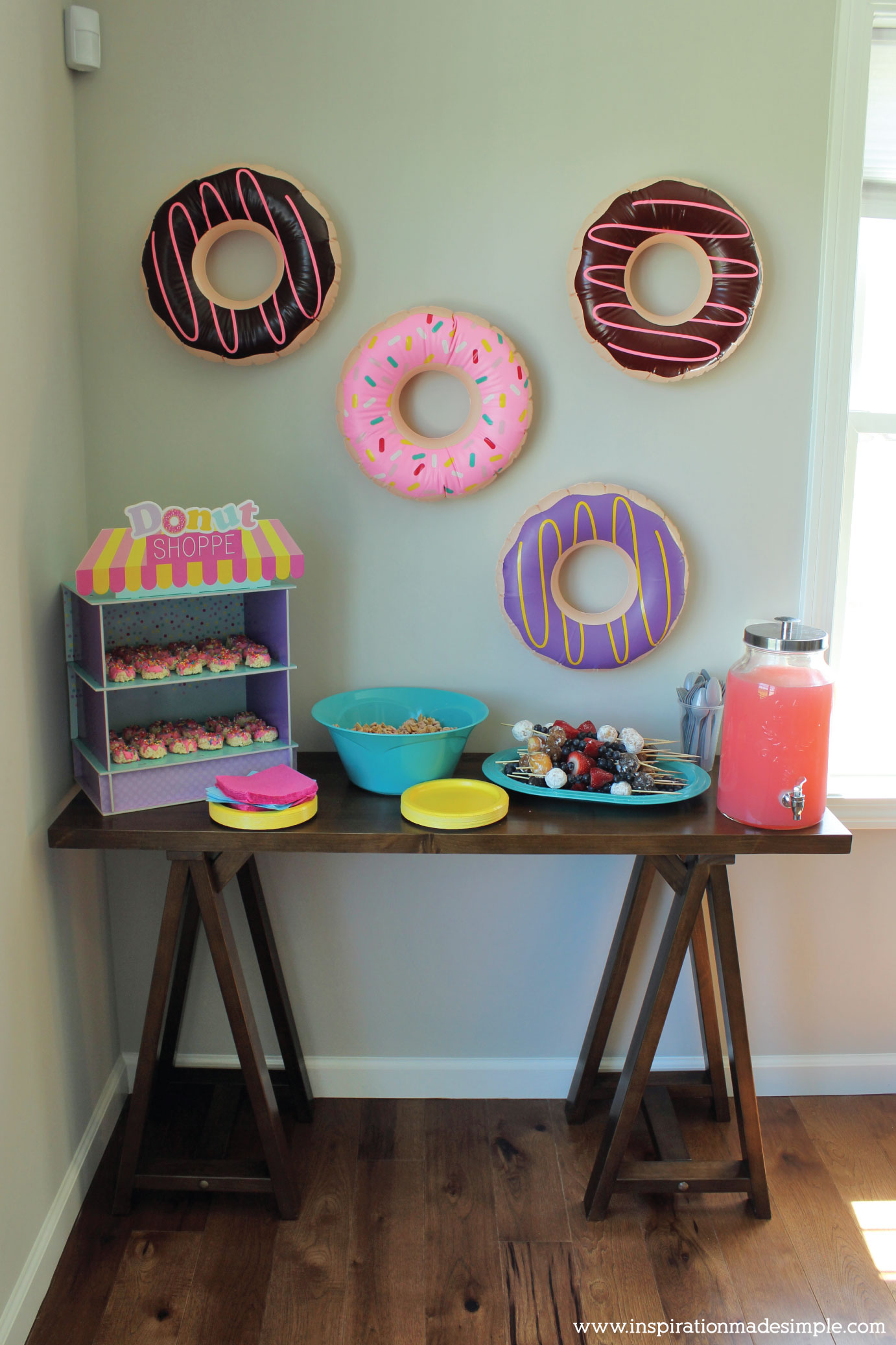 For activities we had Donut Twister, which came from Oriental Trading. I had it set up in a separate room and the kids played several rounds as the adults mingled. 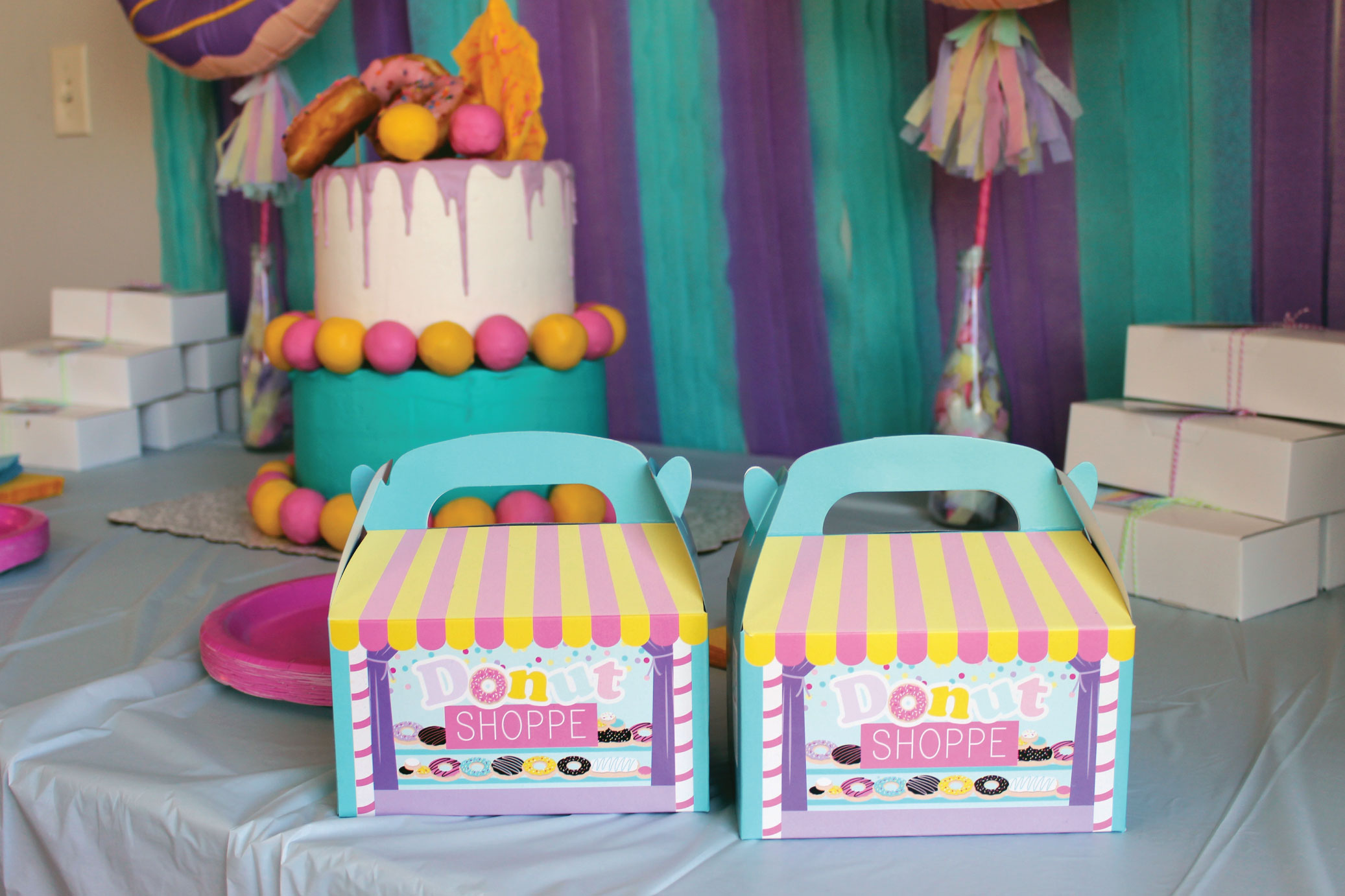 My daughter requested a Treasure Hunt, so I put one together, with the treasure being their goodie bags. This was so much fun for the kids. It was hilarious seeing them run from room to room, outdoors and in, upstairs and down. And I purposefully made it a bit vague, like “find the next clue in the sink” without telling them which sink. It was pretty cool to see them split up to hunt and then meet back once someone yelled, “We found it!!!”.  Get the printable Treasure Hunt Cards at the bottom of this post. The goodie boxes came from Oriental Trading and were filled with fun things like a donut yo-yo and donut playing cards! 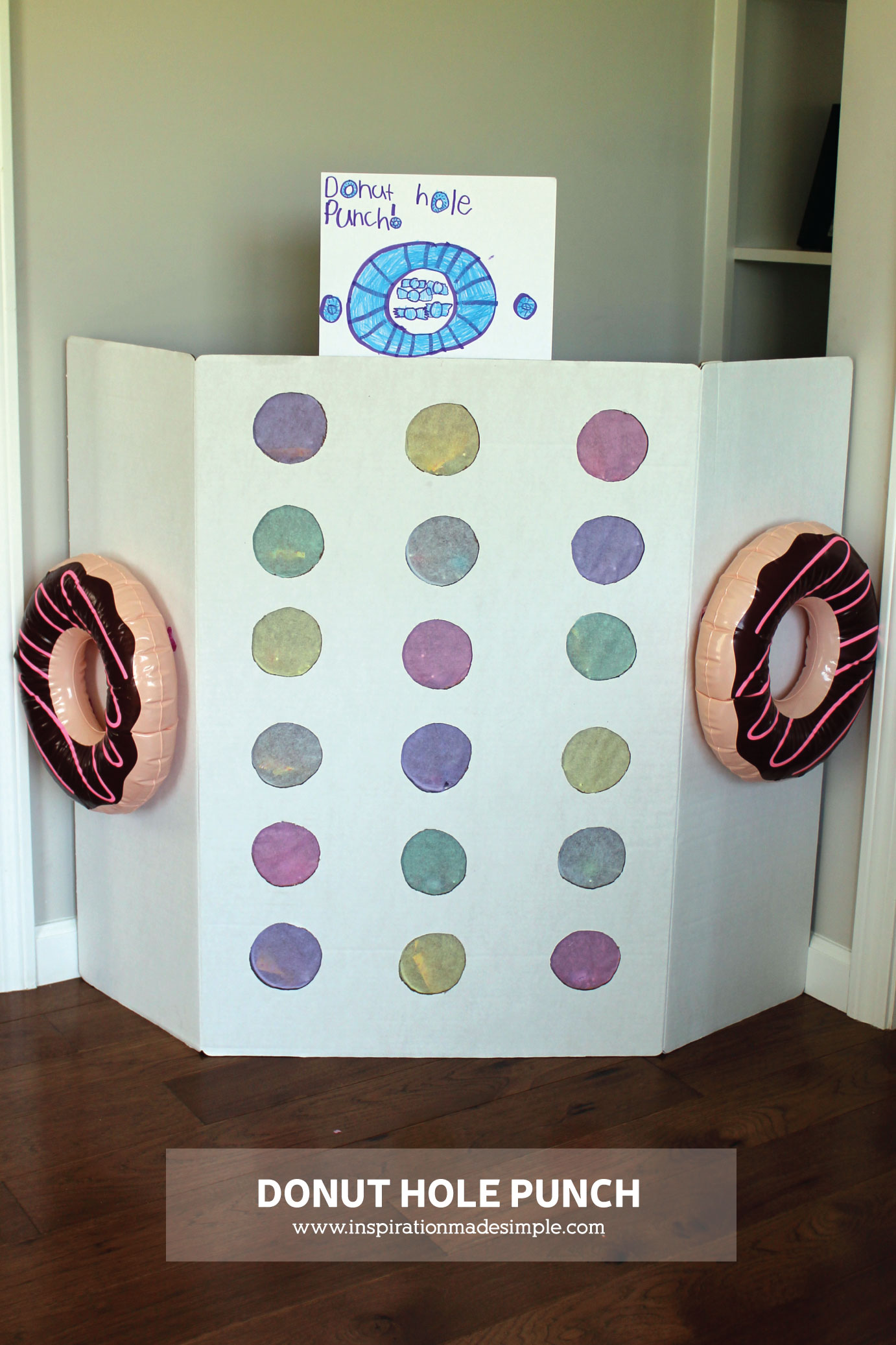 After they found their treasure, we lined up to play Donut Hole Punch. I reused the Pikachu Punch Board from my friends daughters Pokemon Party. My daughter whipped up an adorable sign that we taped to the top. This is such a hit for kids. I don’t know why they love it so much, but they do! I filled the cups with lollipops, gum and other small treats. Seriously, I recommend trying this at your next party instead of a pinata! 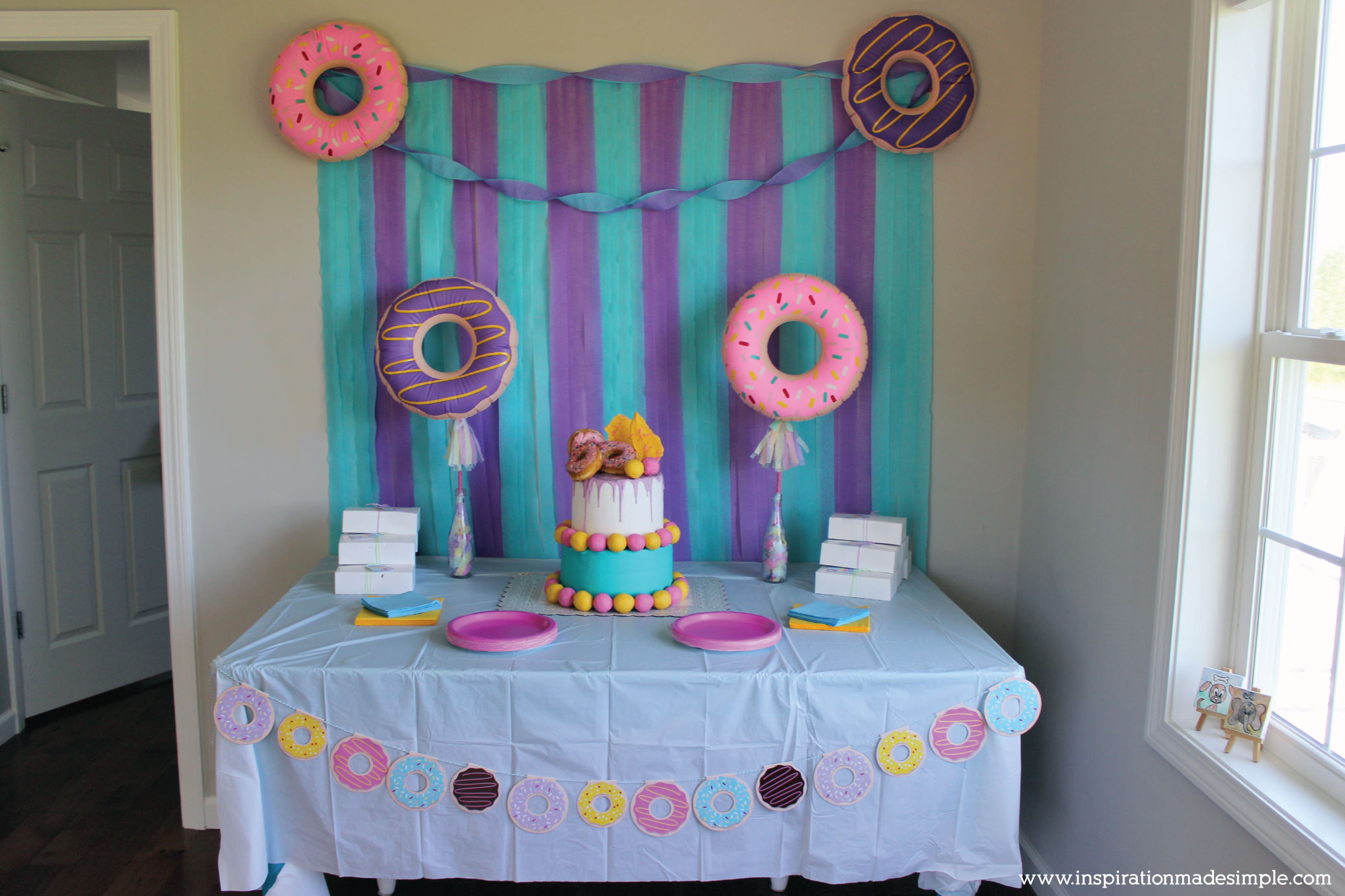 After that it was time for presents and cake and the kids played outside for a while. It was a wonderful party and we are so happy that all of our friends and family could celebrate our sweet Olivia’s birthday. I love making the parties special, and my kids truly appreciate all of the time and effort that I put into them. I stop the big parties after they turn 13, though my son has requested smaller get together’s that usually involve laser tag or other such activities, so now now I have just my youngest left. She may throw me curve ball themes, like a Fire Hydrant theme, but I love creating a party that I know she will remember for years to come and hopefully look back on fondly. Creating memories one moment at a time.

Downloads – pdf format. Personal use only. Do not alter.
Donut Party Favor Tag 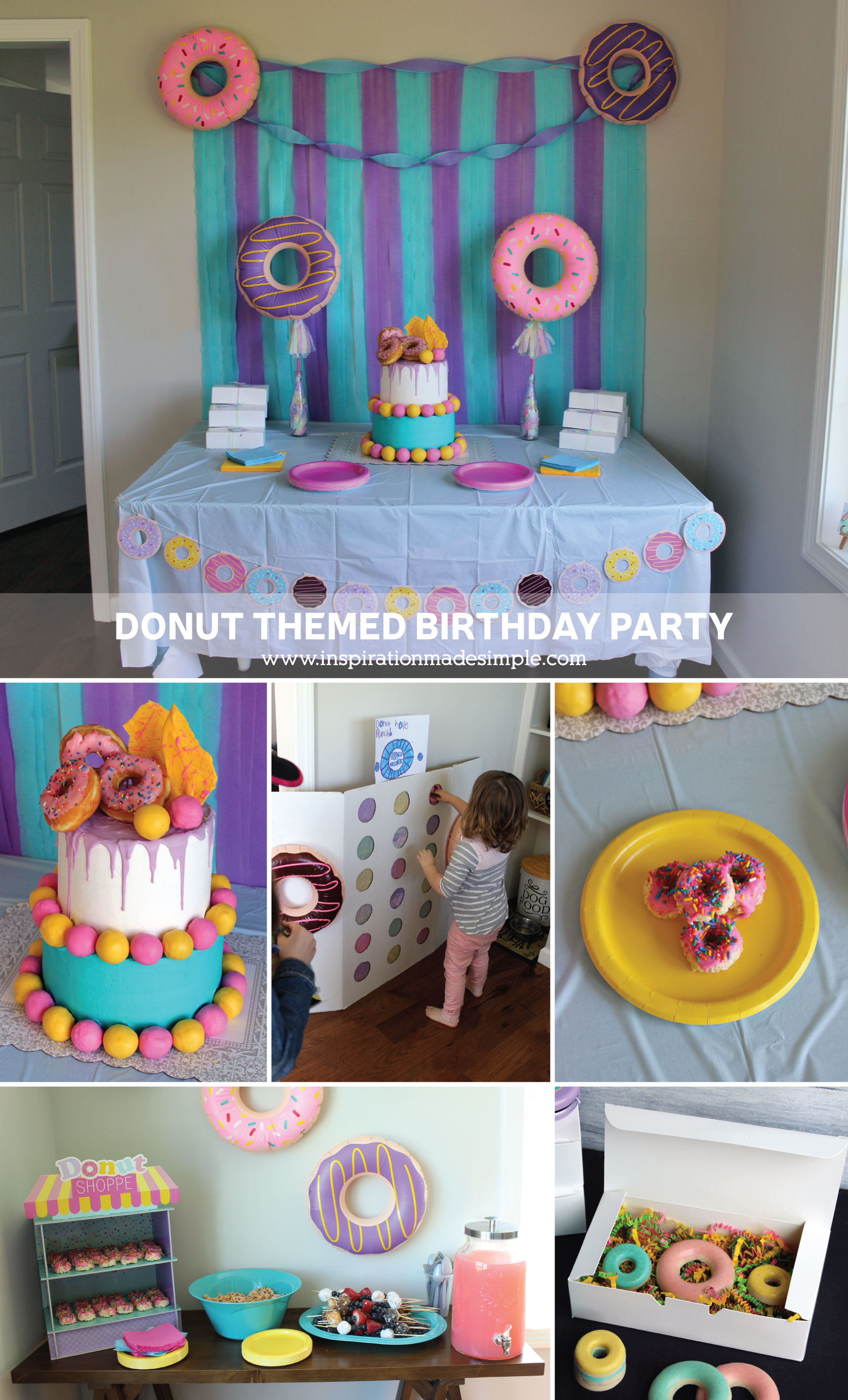 Find me over on the Darice Blog tomorrow sharing how to make this gorgeous Grapevine Sphere Planter: 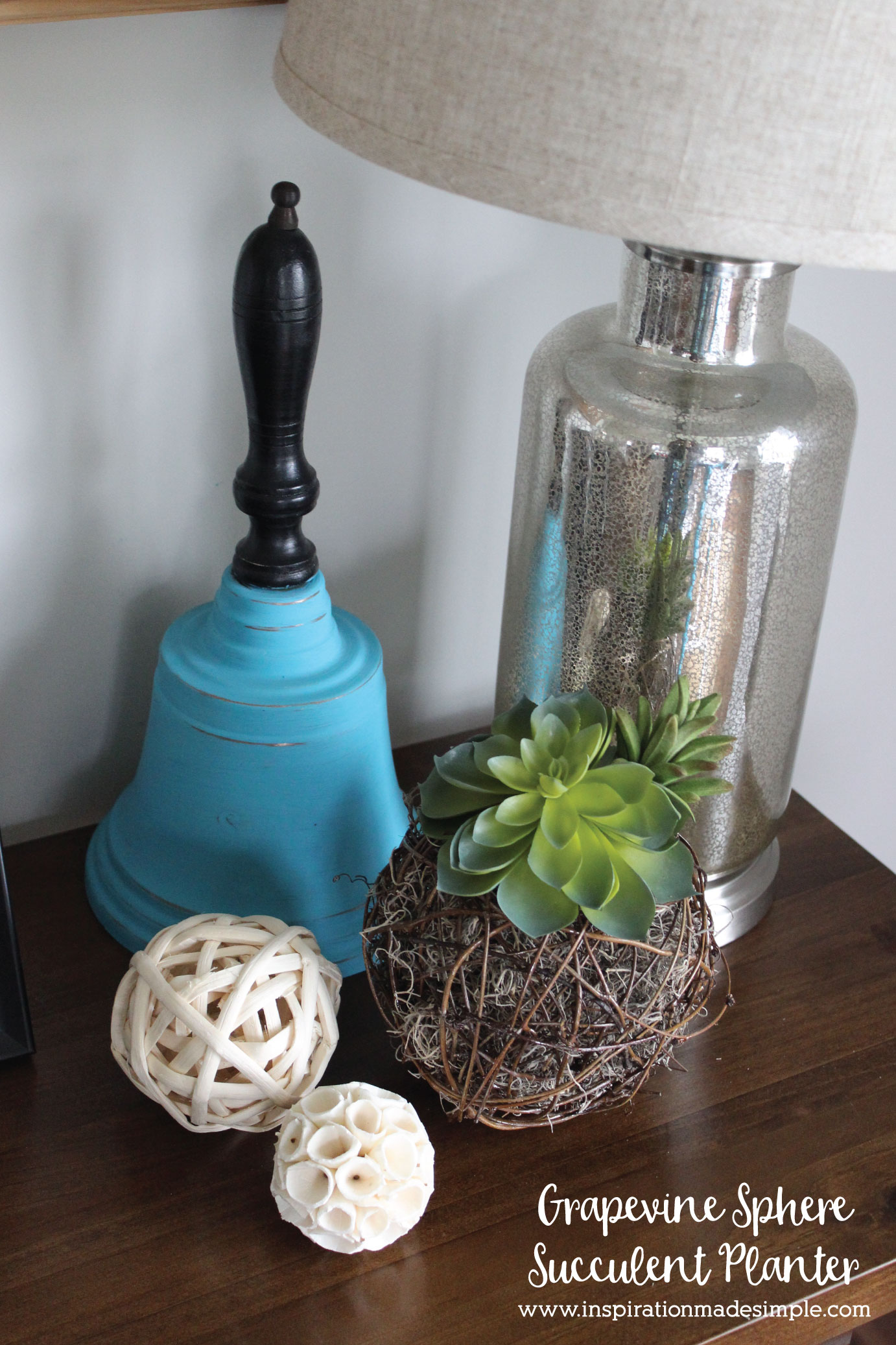 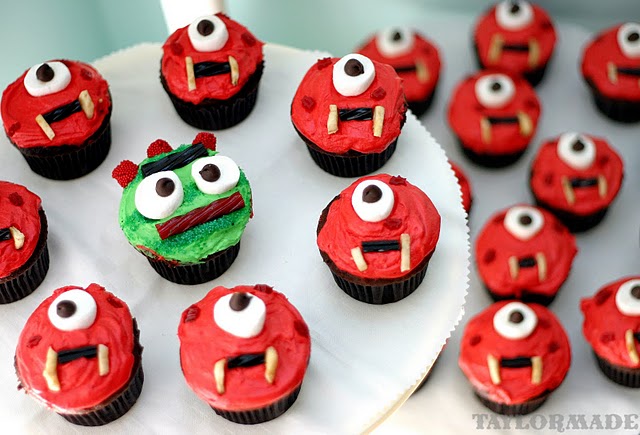 What is the Cricut EasyPress? 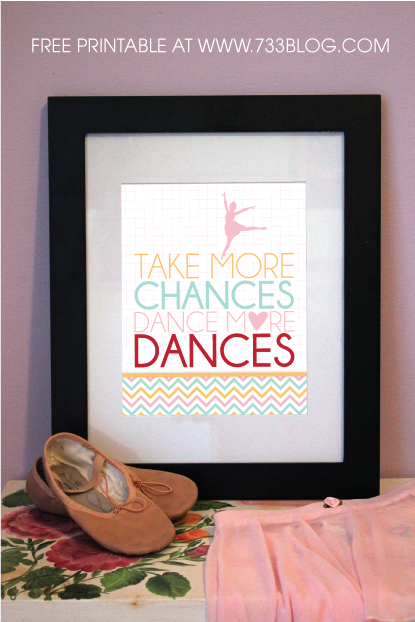 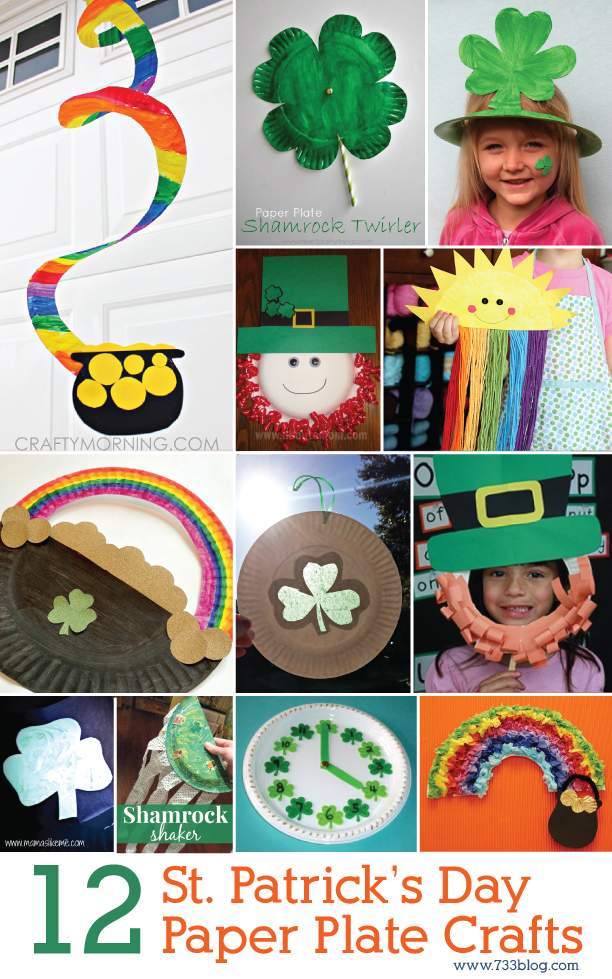