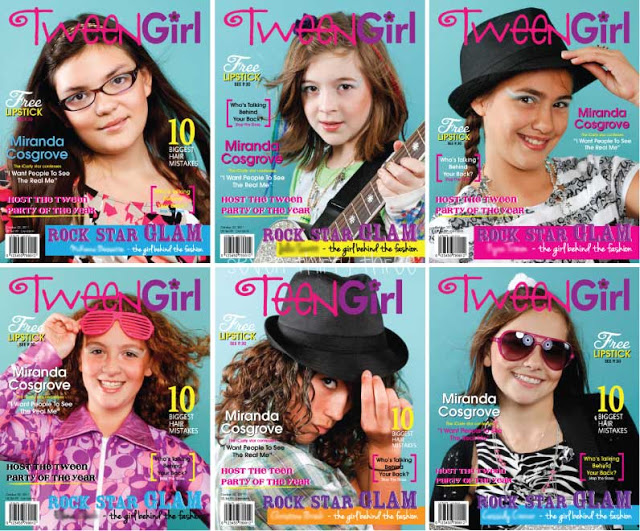 I love hosting themed birthday parties for my kids. It is something that I find creatively enjoyable, and the kids all seem to appreciate it. Although I go big, I try to keep it budget friendly and the invite list small. This Rock Star Glam Birthday Bash was tailored to my daughter, Cassidy, who just turned 11. We celebrated with five of her good friends and what an AWESOME time we had! 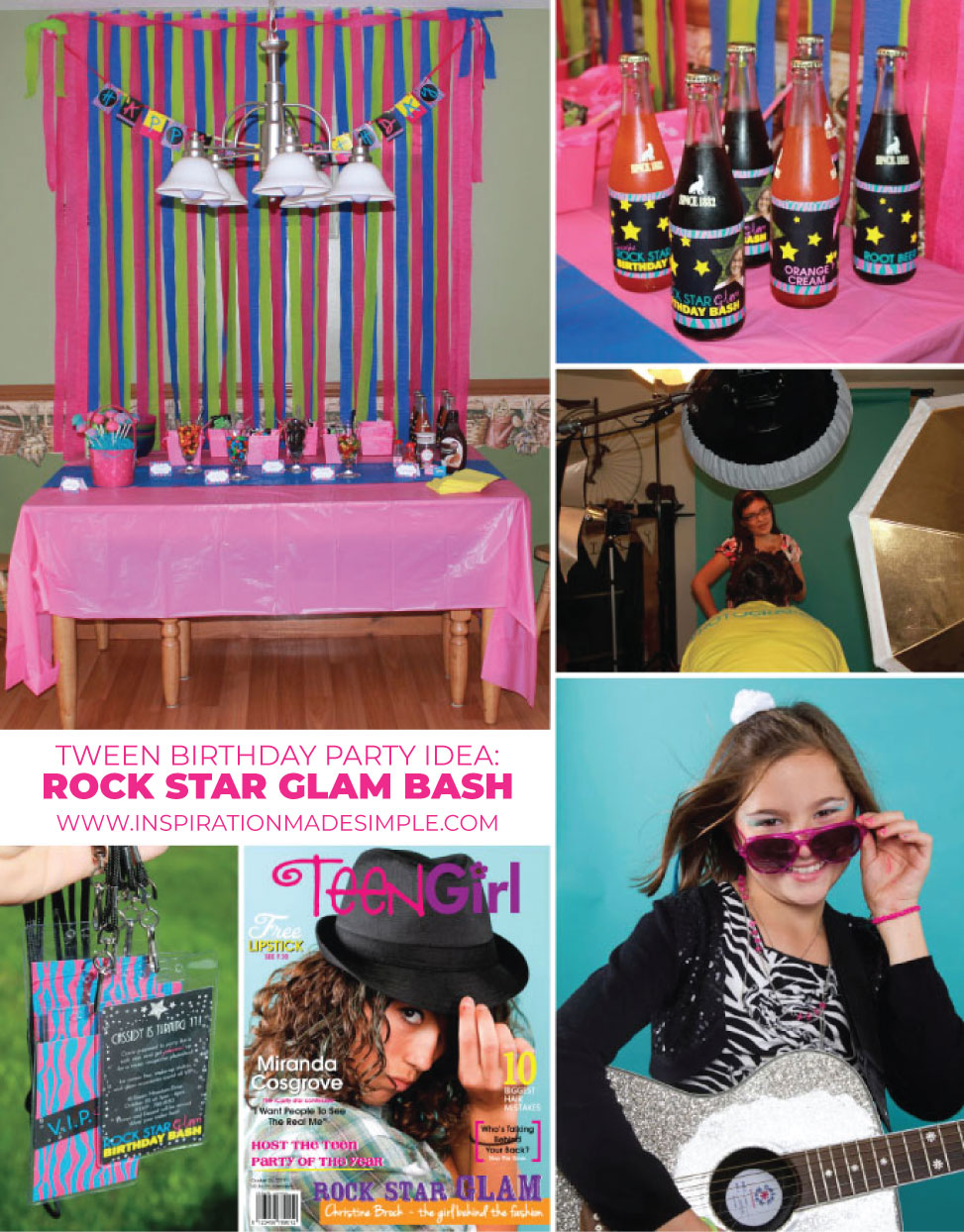 I designed several pieces for this party and am sharing them at the bottom of this post so that you can recreate it in your own home!
One of my favorite parts of this whole Rock Star Birthday Bash were the Backstage Pass Invitations. I designed and printed the invites and placed them inside clear plastic ID pouches attached to lanyards. Cassidy handed the VIP Invites to friends while at school. 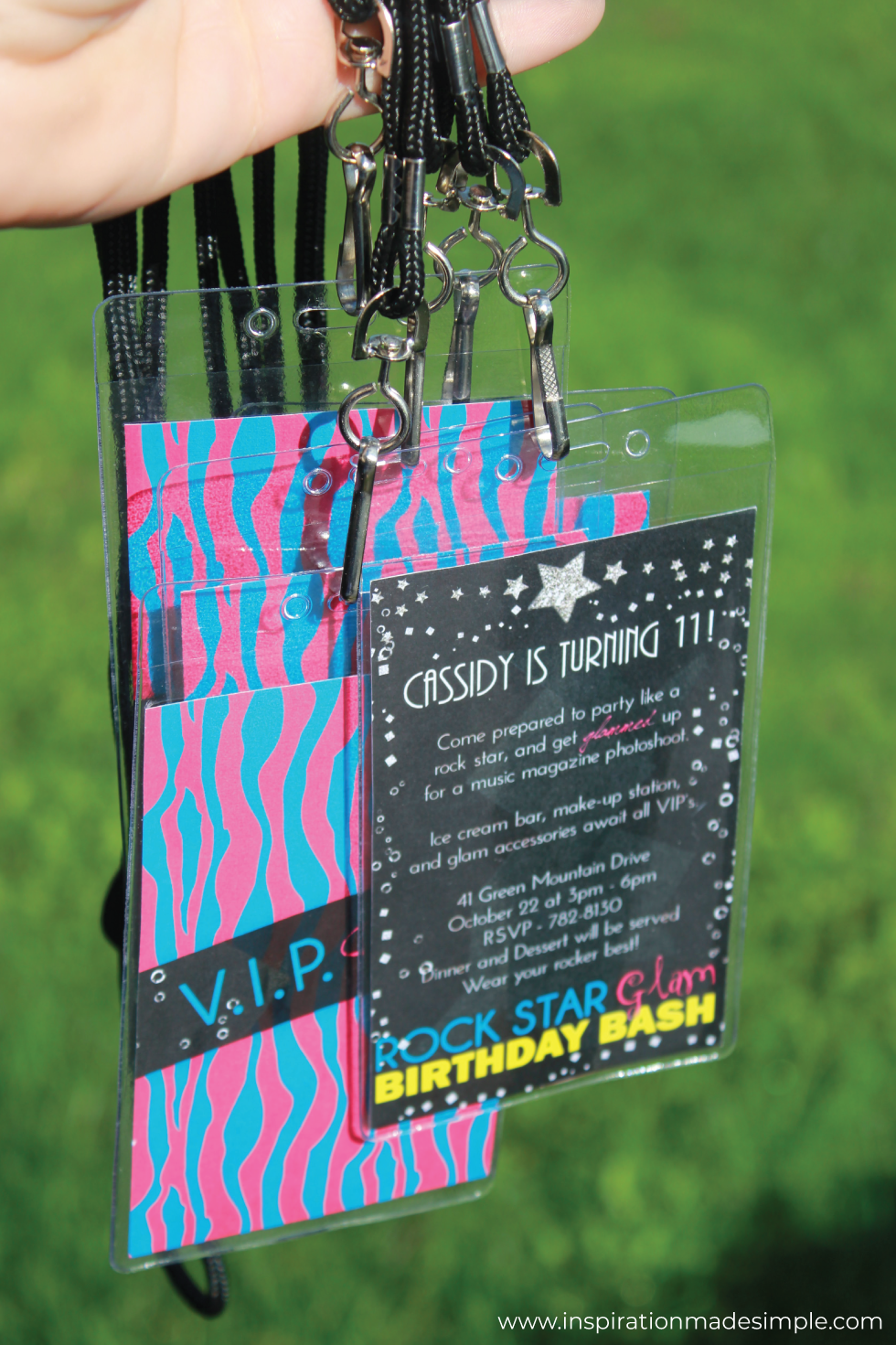 One of the benefits of keeping the guest list small is you can easily turn your house into a party zone! My living room was a photo studio, the kitchen was our dining space and the basement is where the girls had their make-up done, opened presents and just hung out.

When the girls arrived at our house they were greeted by Krista who played the part of Security perfectly. She had a clipboard with the VIP list – if the names not on the list, no entry! TIP: Invite YOUR friends to help with the party! You’ll have just as much fun as the kids. 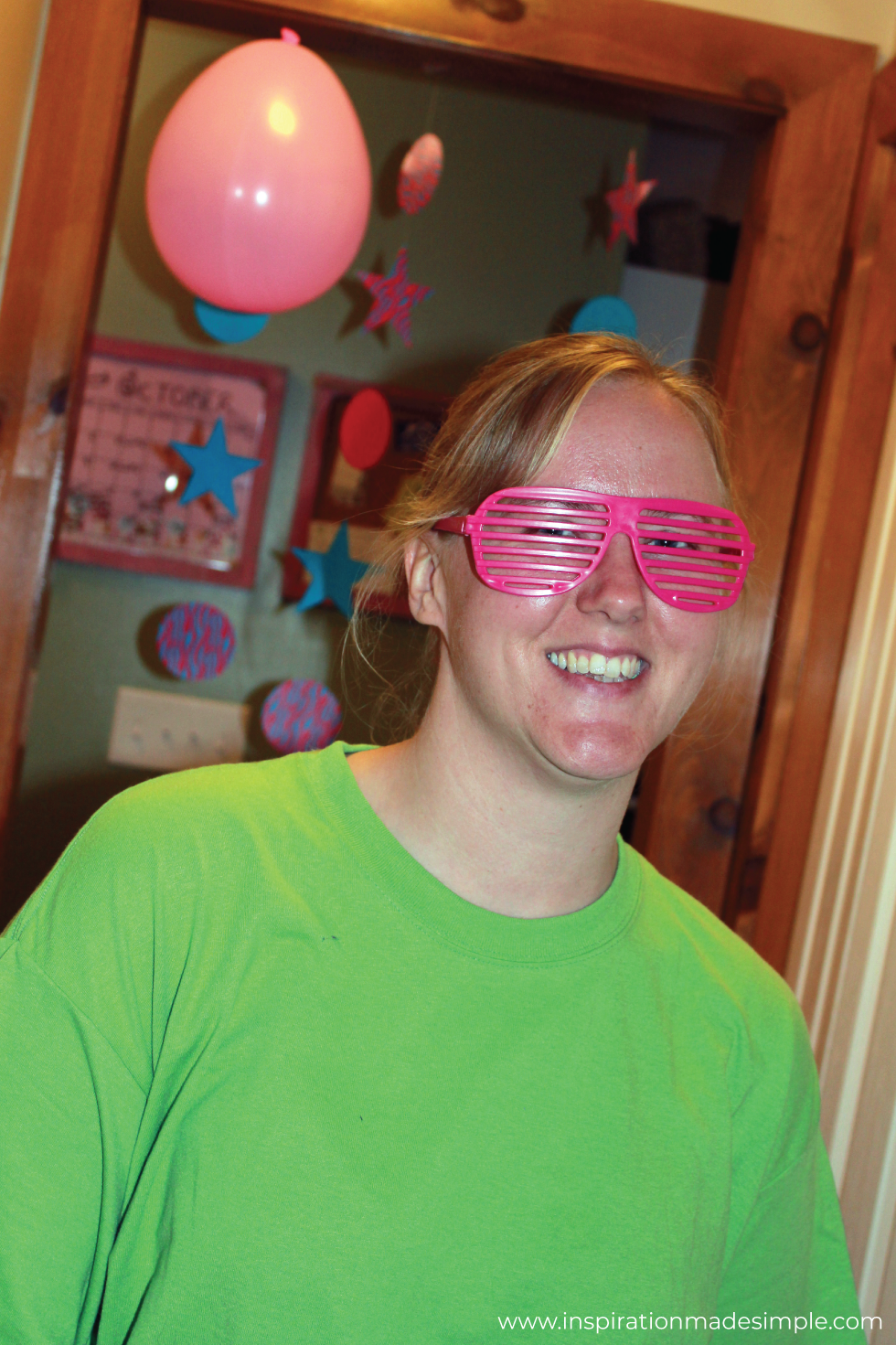 Once inside, the girls were ushered past the “photo studio” to the greenroom/make-up and hair station where they got glammed up by the resident make-up artist, Melissa. She dolled them up with blue eye shadow, sparkles, lip gloss, and hair extensions.  It was great to see everyone had come dressed in their rocker best. 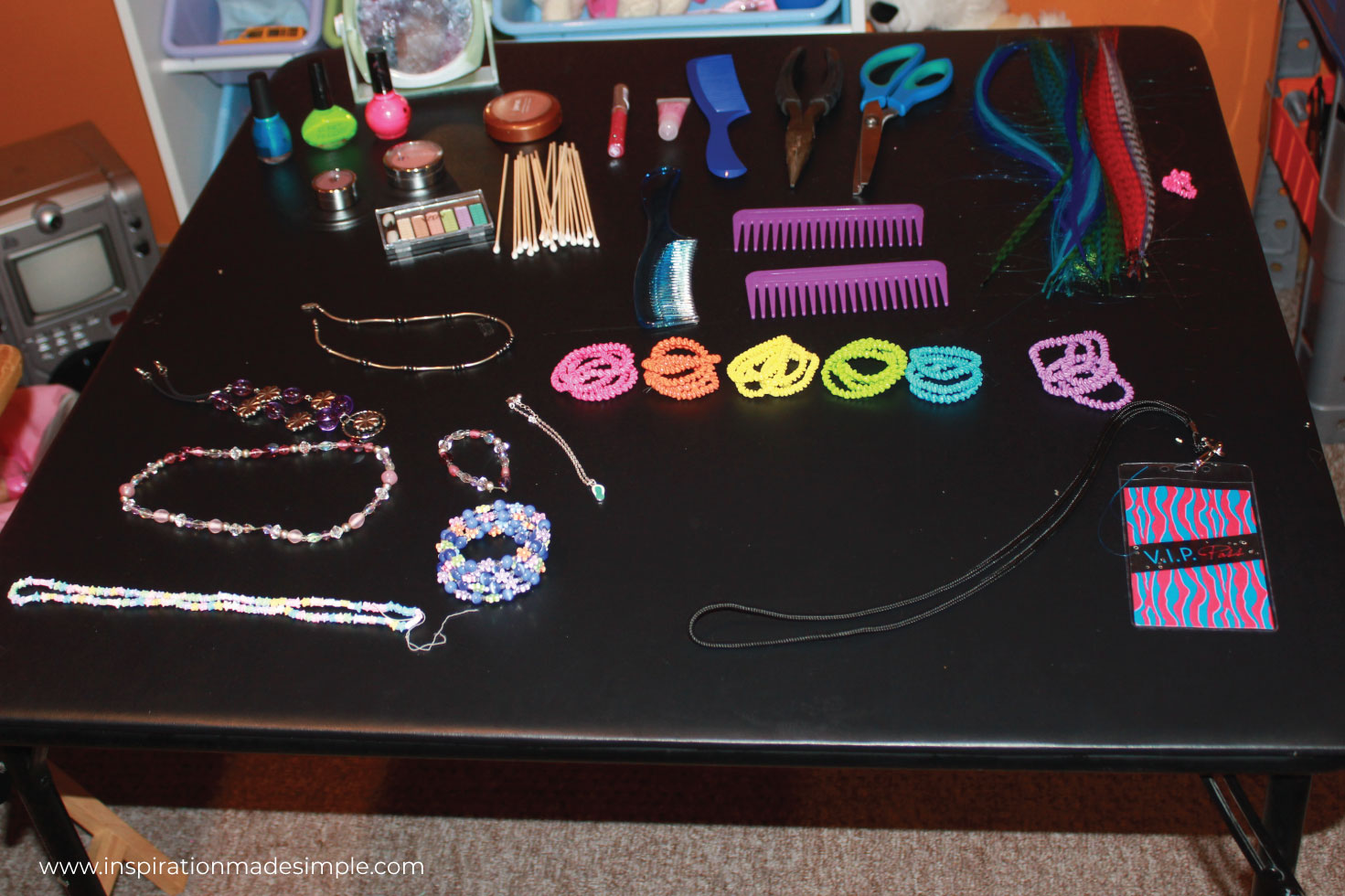 My helpers all wore brightly colored shirts with their role on the back. The shirts were made by creating freezer paper stencils which I cut with my Cricut (affiliate link).  I was the PARTY PLANNER,  Melissa was MAKE-UP (and should have been CHEF too!), Krista was SECURITY, and Michelle was PHOTOGRAPHER. 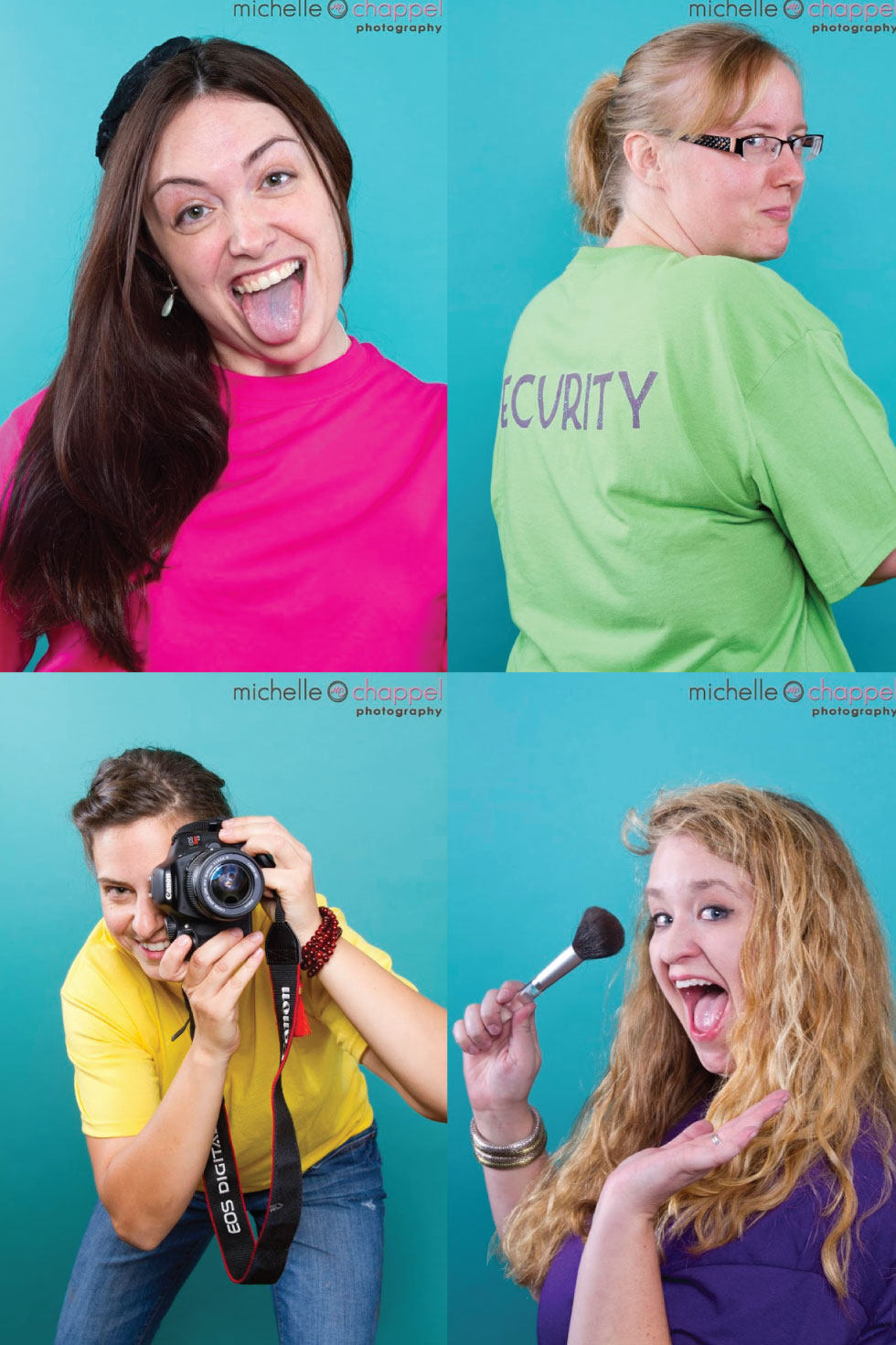 Once the first girl was suitably gussied up, she was sent off to the photo studio for her magazine cover shoot.  We had the lights, the camera, and the action!
A fan was used to give the hair a windblown effect, and we had a guitar, drum sticks, and glasses for props.  I turned the radio on and the girls had a blast in front of the camera.  Some were more comfortable than others, but Michelle is a professional photographer and was able to draw each girl’s personality out.  For those that needed it, she helped direct, and those that didn’t, she let rock out.  The girls were thoroughly impressed with this experience!  They really were pretty excited about the whole thing, which made the whole night for me. 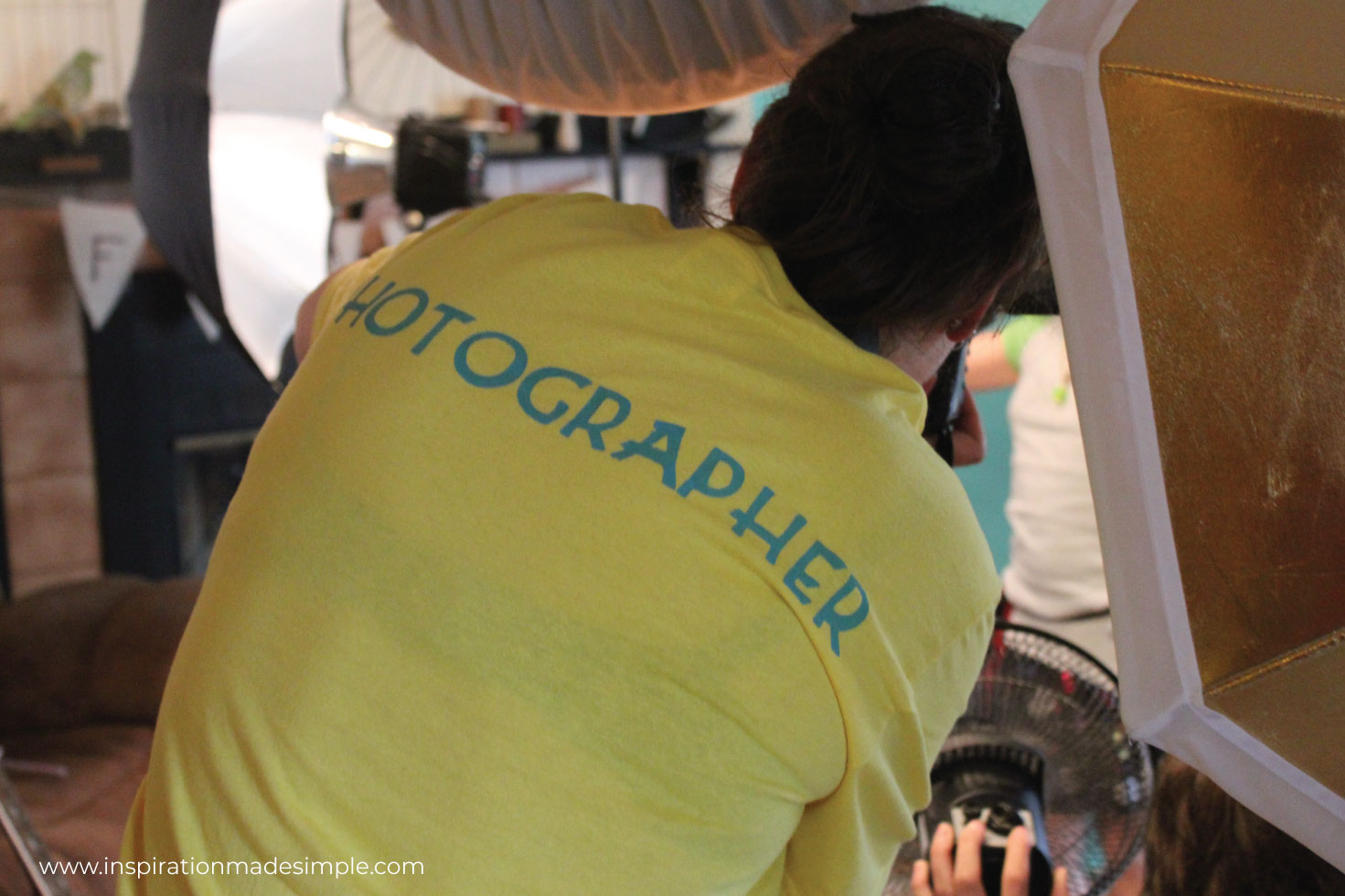 Once all of the girl’s photos were taken, Michelle loaded the photos onto her computer. Together we picked out the ones we liked best. I inserted them into the magazine cover that I had designed ahead of time and then printed them out.  Once we trimmed them down, I inserted them into frames I picked up at a bargain shop for $2 each. 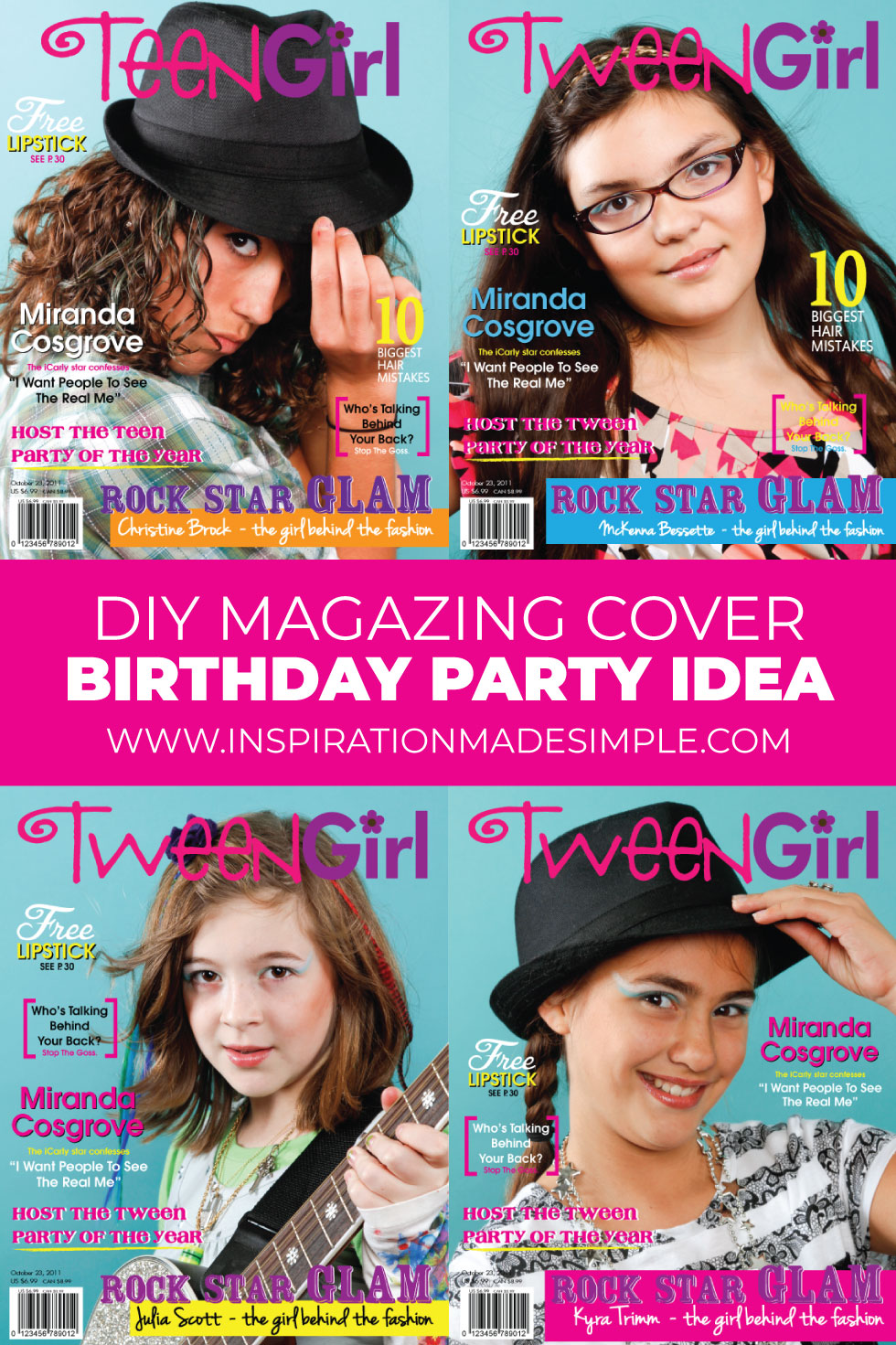 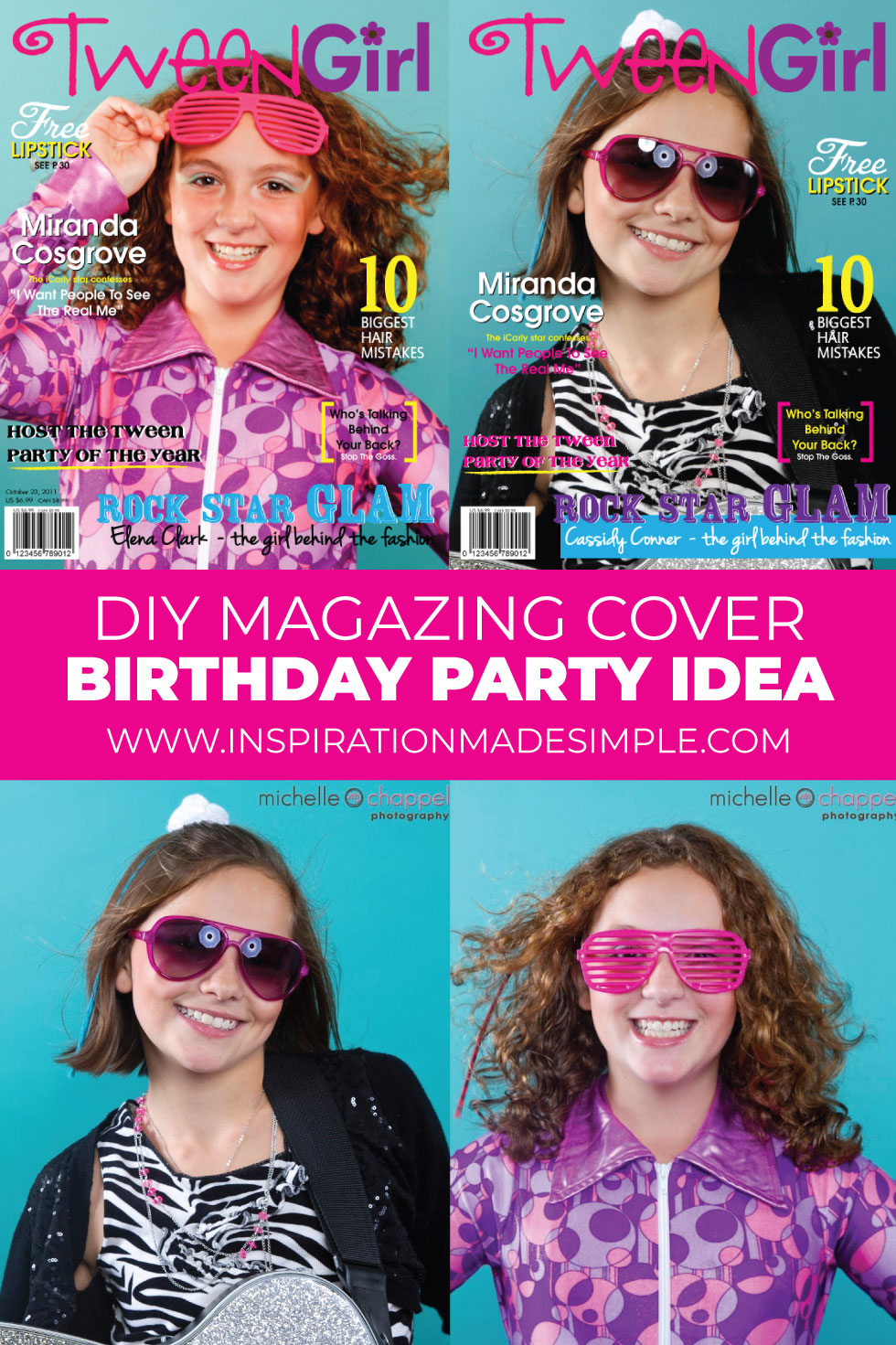 UPDATE: I’ve had a lot of questions on how to make the magazine covers. I’m a graphic designer and used Illustrator for mine, but you can use a free online software like Canva, or there are even free websites that will allow you to upload a photo and change out headlines, etc.

While Michelle and I were doing all of that, the girls were eating dinner, thanks to the help of Melissa.  For dessert, we had cake pops and an ice cream buffet – which was a big hit. 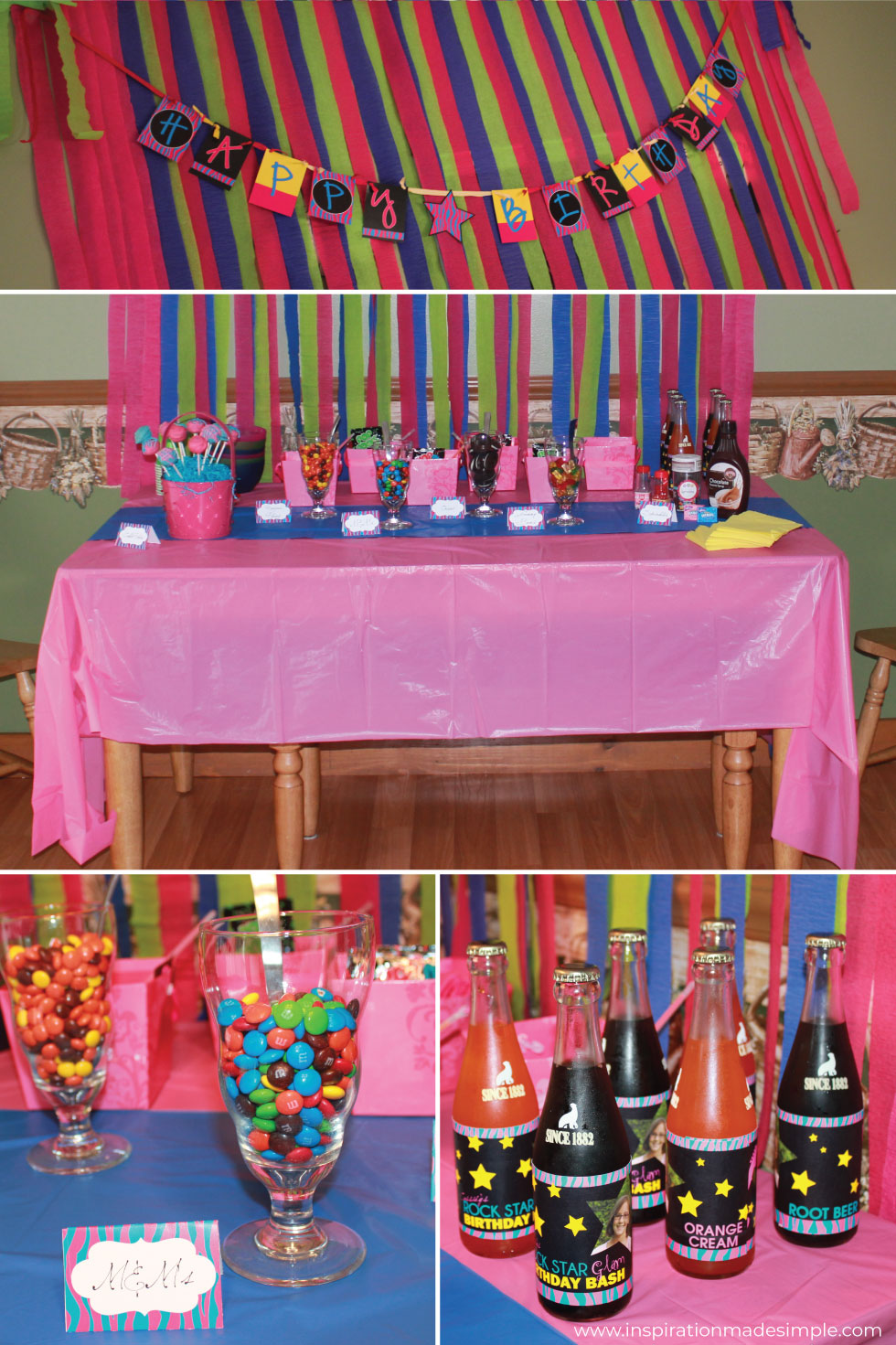 The buffet table was set up in my dining room and was covered with cake pops, ice cream toppings, sodas and favor boxes. I also covered glass bottles of root beer and orange cream with custom labels and made table tents that matched the rest of the party design. This all just added to the party atmosphere. The girls thought it looked so cool and couldn’t believe it was all for them. 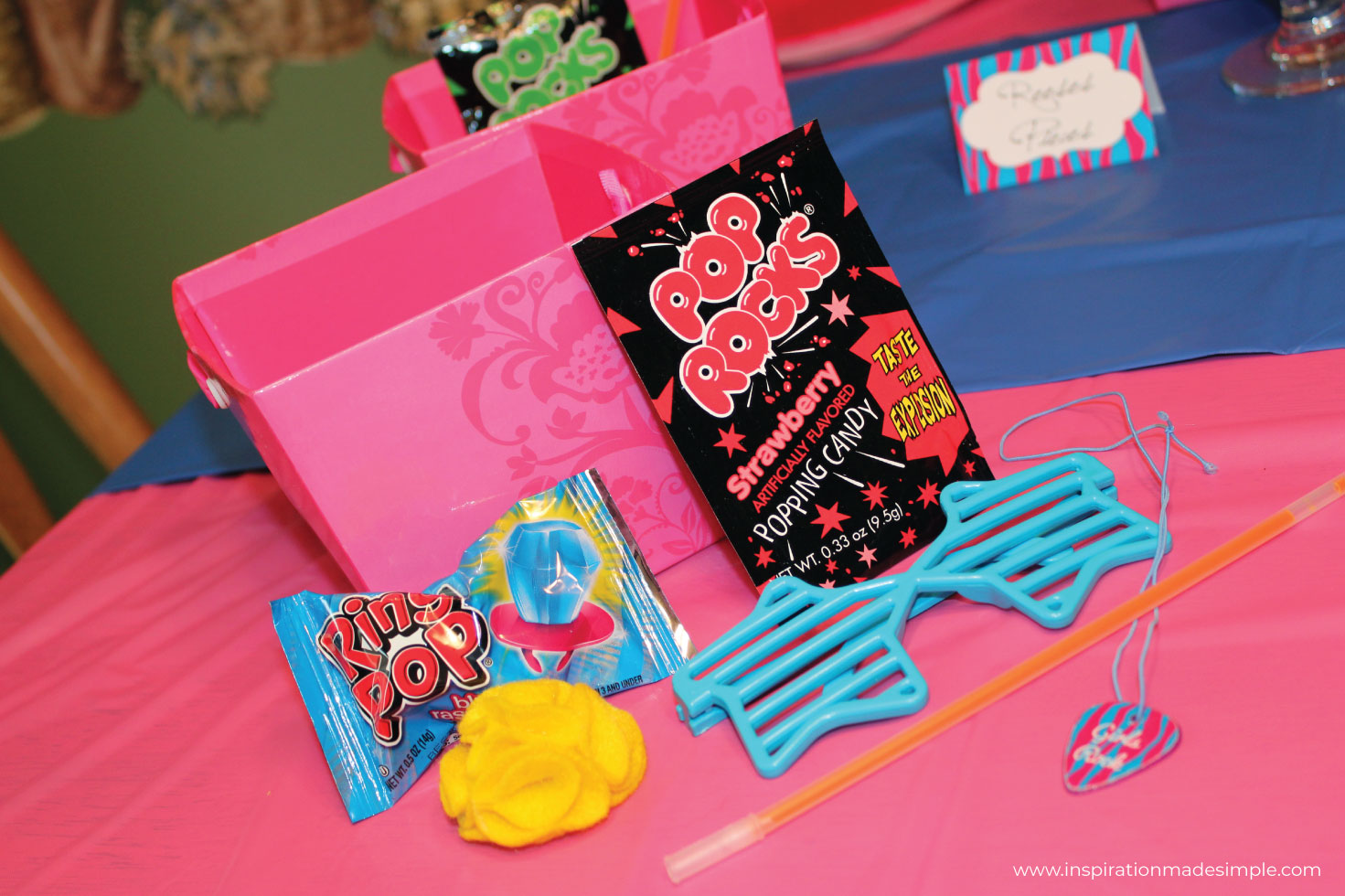 After the girls were done eating, we sent them downstairs to hang out while we set up their framed magazine covers. Once the frames were on display we called the girls up for the reveal. I absolutely LOVED their reactions! 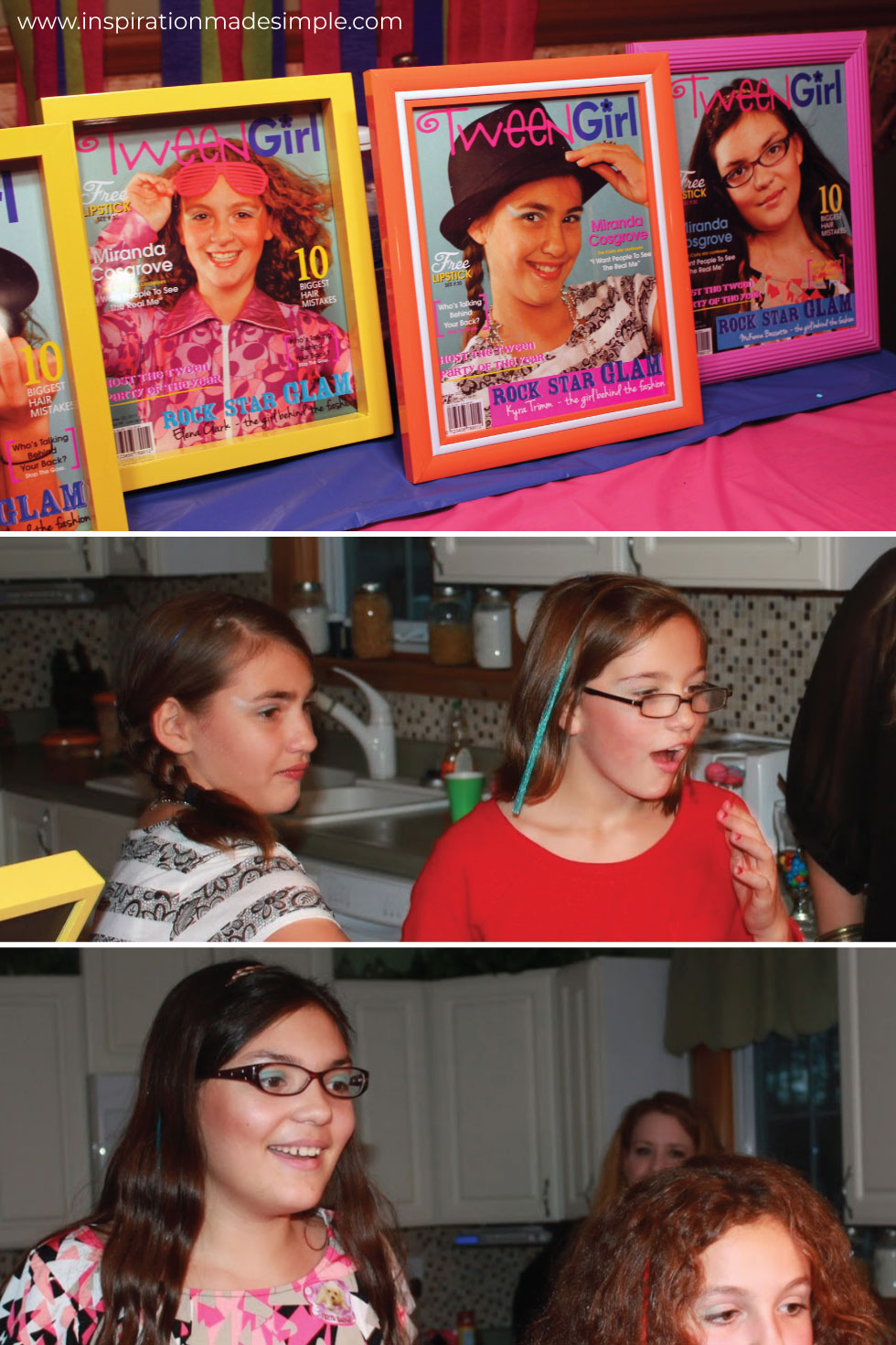 Judging by all of the comments, and even texts I got from the moms in the days afterwards, everyone had a blast. This party will definitely be remembered for years to come! 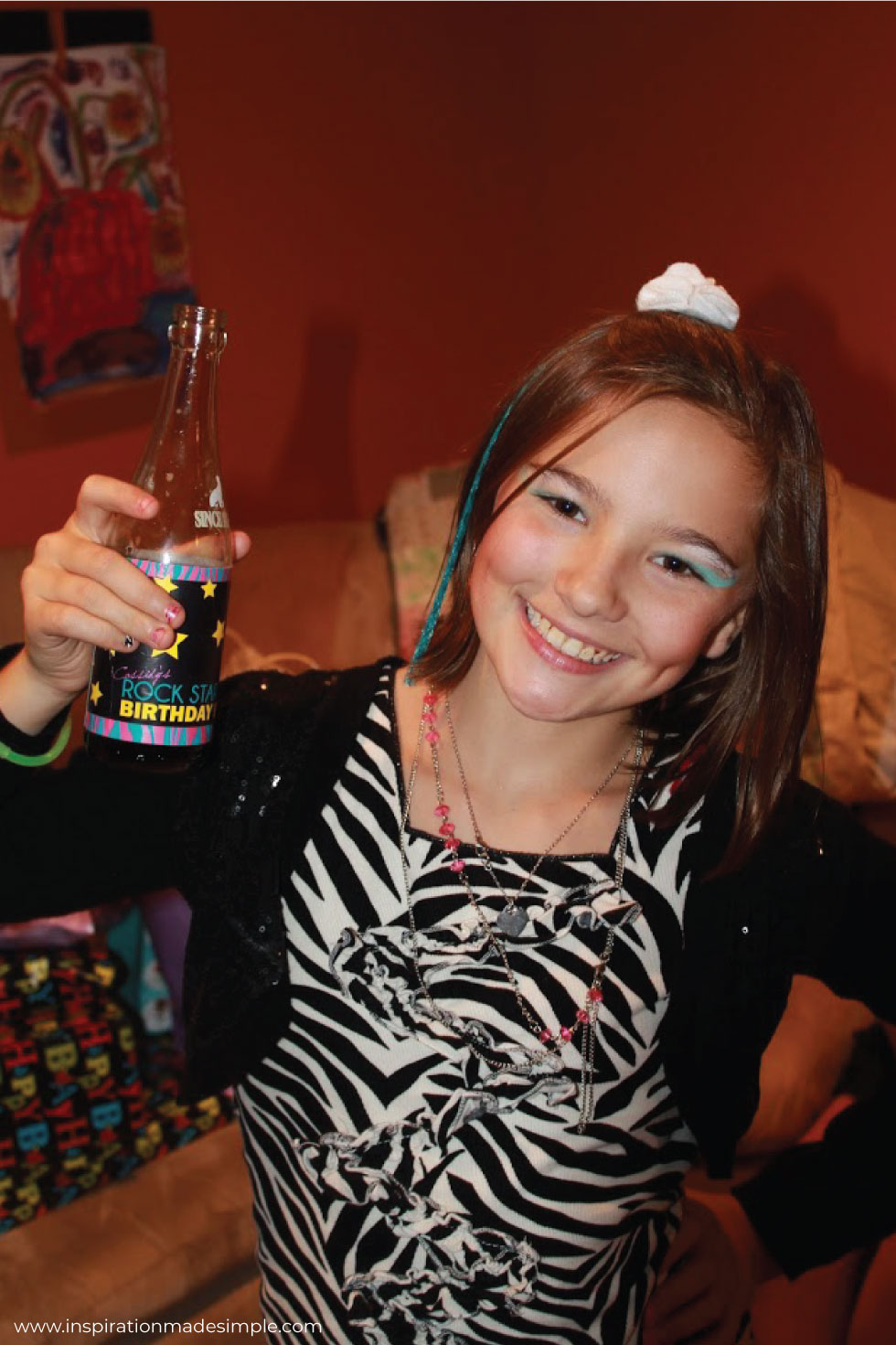 Rock Star Birthday Banner – print onto 8.5 x 11 cardstock, cut out, punch holes in the two top corners of each piece and add to a length of ribbon or string. 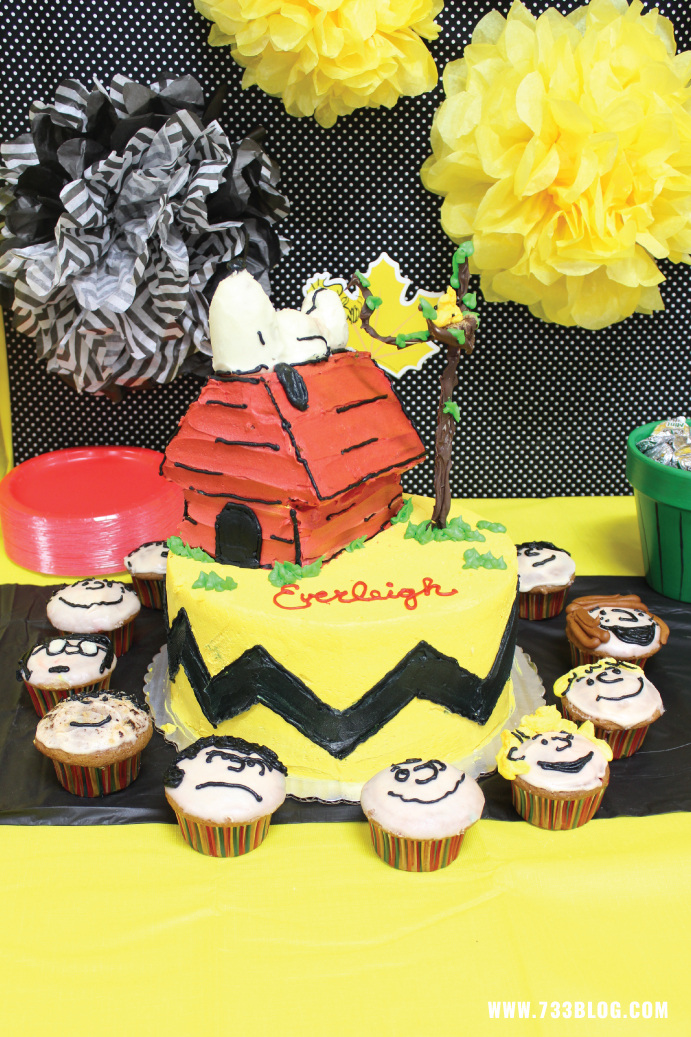 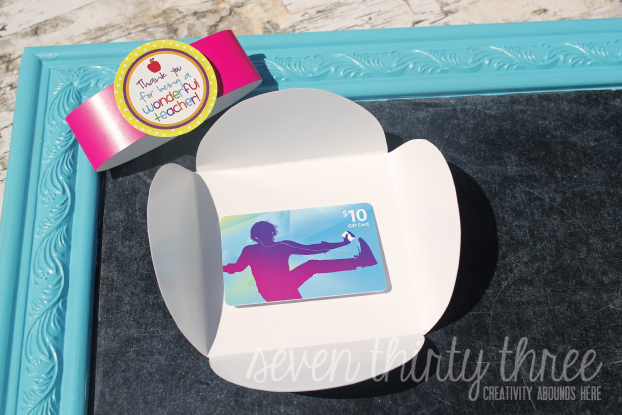 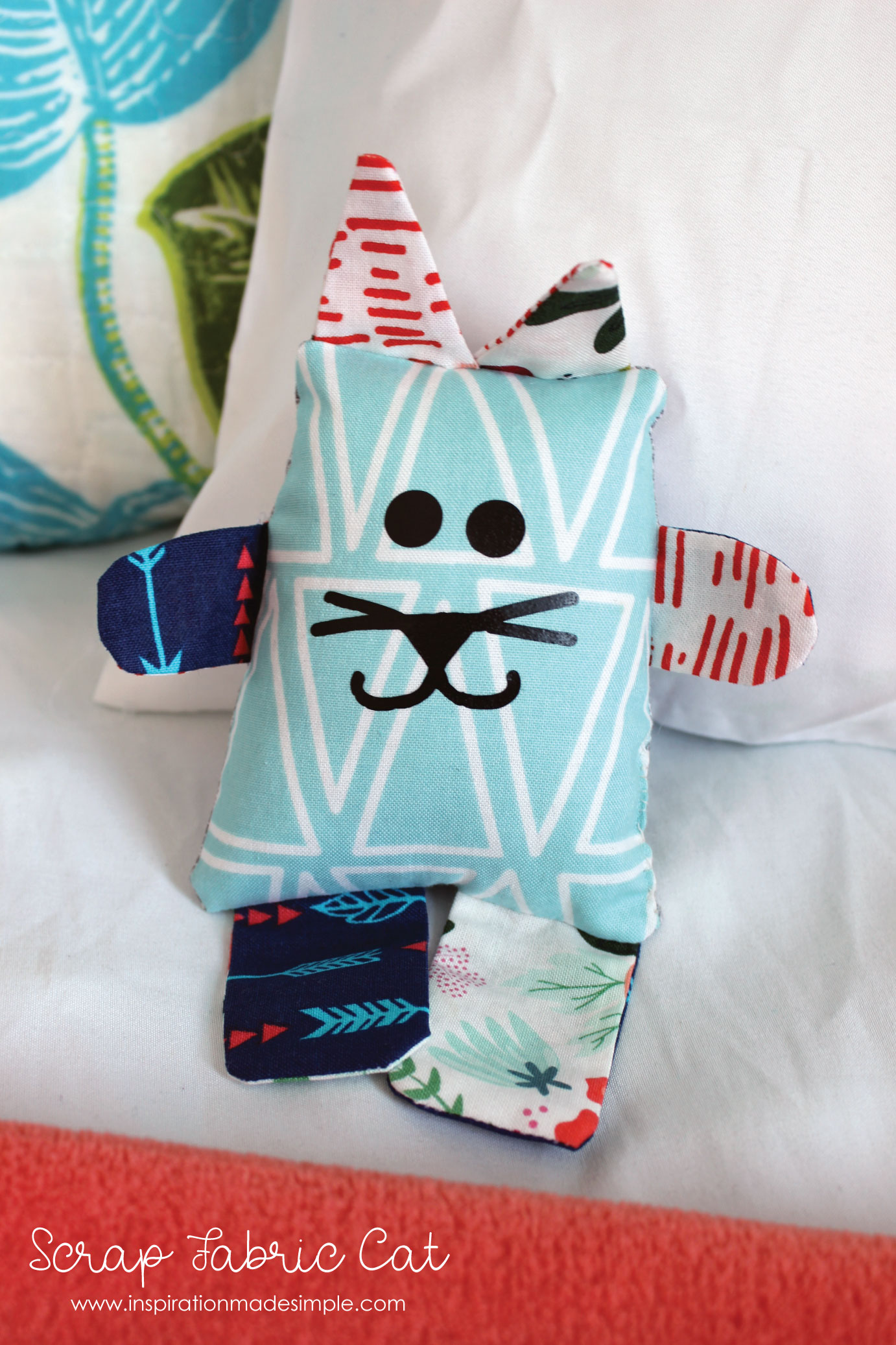